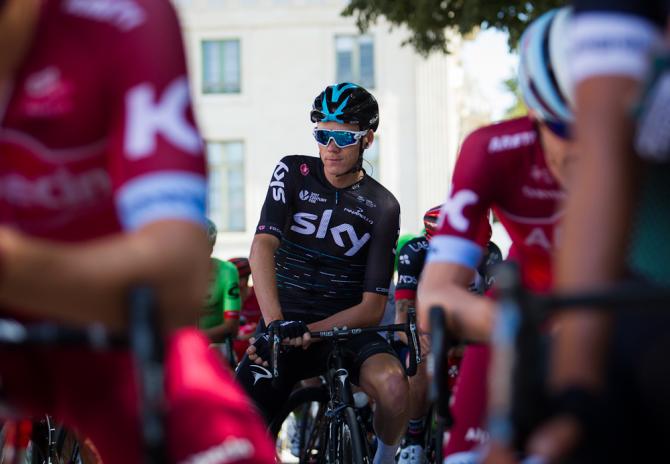 Chris Froome has moved up to ninth overall at La Vuelta a Espana after negotiating a windswept second stage from Nimes to Gruissan.

A well-timed late break from Yves Lampaert (Quick-Step Floors) within the final kilometre of the 201km stage was enough to seal both the stage win and take the overall lead, with Froome finishing 16th in a following group.

Despite Nibali clawing back eight seconds and Chaves edging three seconds, Froome was upbeat and hailed the team’s display in tricky conditions.

“I think the guys did a great job riding up front all day, I think we were probably a little bit short coming into the final few kilometre, but I’m still happy with that result as I think we did a great ride”, said Froome.

“The guys kept myself and Wout right up front pretty much the whole stage so we can’t complain about that. There were a few seconds lost to Vincenzo Nibali and Esteban Chaves, but some gained also on Contador and some of the other GC guys so I think we can be happy with that with the mountains tomorrow.”

Trek-Segafredo tried to spring an early attack on the peloton in the opening kilometres, but Froome believes it would have been brave to try such an attack given the conditions.

“Trek certainly tried [to split the peloton] after two or three kilometres but that was too early, especially with 200km left.

“It was always going to be a long, hot day for anyone who was going to take it on, so that’s why we didn’t really see anything until the final there.”

After a challenging day on the flat, attention turns to the mountains on stage three as the race heads to Andorra, which Froome thinks will be a barometer of his rivals’ conditioning.

“I think everyone is still not sure of our form after the Tour, a lot of us haven’t raced since the Tour and a lot of guys will be coming into this having not raced the Tour either so it could go either way.”