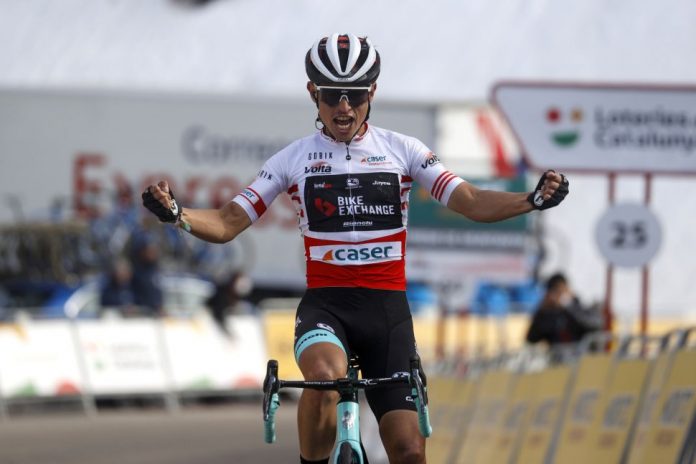 Esteban Chaves won the 4th stage of the Volta a Catalunya, crossing the line first at the summit finish to claim his first major victory in two years.

The Team BikeExchange rider finished the 166.5km stage at Port Aine, at an altitude of 2,000 metres, seven seconds ahead of a bunch that included overall leader Adam Yates.

“I am very happy, I have never started a season with such good feelings and much less with a win,” said Chaves.

Adam Yates holds on to first place in the general classification, 45 and 49 seconds respectively ahead of teammates Richie Porte and Geraint Thomas.

Chaves sits sixth in the overall standings, 1min 4sec back after a deserved win in the Pyrenees – his first since taking stage 19 at the 2019 Giro d’Italia – after finishing second behind Yates in Wednesday’s third stage.

The 31-year-old attacked with around seven kilometres remaining and managed to hold off a powerful chasing pack which also included Geraint Thomas, Alejandro Valverde and Nairo Quintana.

“I knew it was a very tough stage, I had nothing to lose and a lot to gain,” added Chaves. “There was a lot of headwind and it was a risk (to attack), but in the end it went very well.”

Friday’s fifth stage is a 201.5km run between La Pobla de Segur and Manresa which features a rapid downhill finish.