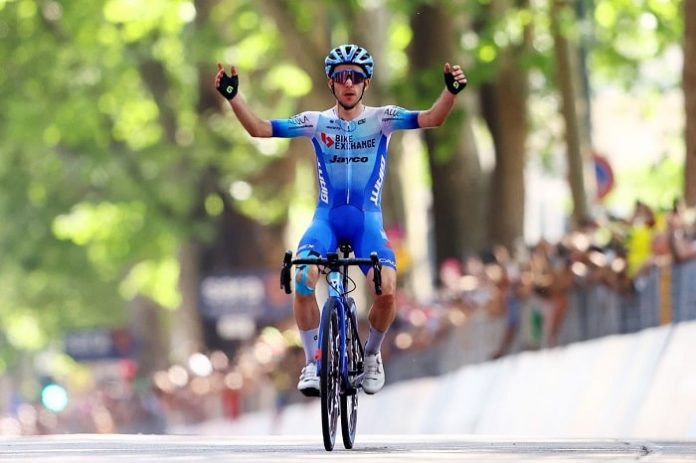 You can rewatch STAGE 14 HERE

Yates attacked from a four-man breakaway group with less than 5km to go to win his second stage of this Giro, while Ineos’ Carapaz took the pink jersey from Juan Pedro Lopez.

The British rider, who is well behind in the overall standings, finished 15 seconds ahead of Carapaz, Jai Hindley and Vincenzo Nibali after 2019 winner Carapaz attacked with 28km left but couldn’t maintain his lead.

Yates made his move just before the final descent and rode the 4.5km all the way home uncontested as Carapaz made sure of a seven-second gap between him and his general classification rival Hindley.

“My plan today was to try for the breakaway. I tried a few times in the beginning but it was not possible. I made a couple of moves but maybe the group was too big or I was not allowed to go,” said Yates.

Asked whether Saturday’s win made up for his disaster on the ninth stage, when he lost over 11 minutes on the climb to Blockhaus, Yates shrugged: “Not really, I came here to win the race. I already had five stages and this is number six.

“There’s one week to go but today was a big effort. I don’t know if I have something left for the last week.”

Bora-hansgrohe bust the race wide open when they made a bold attack with 80km left which led to a 12-man breakaway group featuring a host of challengers for the overall title. They managed to stretch their lead on the chasers to well over a minute by the time they hit their first go up the gruelling Maddalena climb with around 50km to go.

That gap was extended once the group entered the second and final round on the Superga and Maddalena ascents, and with the riders once again gritting their teeth four of that group tried to make another break.

Lopez was in that group alongside Nibali in his last Giro after announcing his retirement early this month, but they were quickly caught before Carapaz made his move with 28km to go.

Giro winner three years ago, Carapaz was first caught by Hindley before Nibali and Yates joined them once he made it over the second Maddalena climb.

“It’s been a short but very hard stage,” said Carapaz. “I’m delighted with how it went. It’s a first positive step for the team. Now we’ll try to defend the Maglia Rosa. I didn’t remember that I also took it on Stage 14 three years ago but I’m glad to do it again.”

And with all eyes on local hero and descent specialist heading into what looked liked an exciting charge into Turin, Yates popped out of the small pack and quickly left the trailing trio in his dust before cruising over the line.