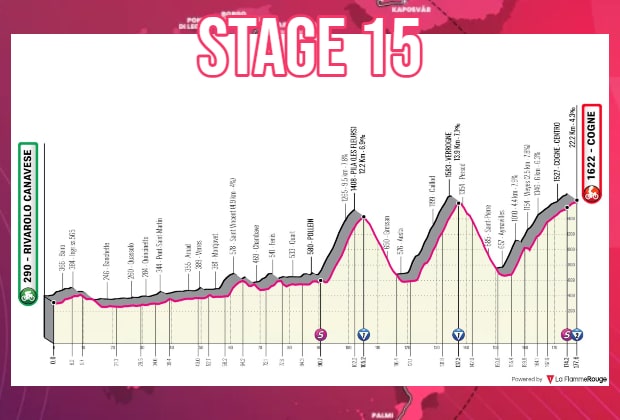 The here-after. A day after one of the most exciting and brilliant race we have seen in years, we have one if not the of the hardest stage. On the eve of the second rest day and more importantly after all the energy spent on Stage 13, this one could prove to be decisive.

Two category 1 climbs and a final category 2 one at with the a top finish at Cogne at 1611 meters awaits us. After an undulating first 90km to the first intermediate sprint, in which some riders will try to get away, the road elevates drastically.

The lactic acid would have accumulated in the legs for many leaders, this big stage might prove fatal for some. Ineos Grenadiers now have the pink jersey and it will be up to them to control the race. They would agree with an early break away to form and then steadily increase the tempo. But team Bora-Hansgrobe will be motivated. Not only have they put on a show but mostly the performance of Jai Hindley won the sprint among the GC contenders twice!

I was expecting a battle between the man looking for the king of mountain jersey… but we were graced by a beautiful battle among the GC. We are now left with only 5 contenders in the same minute. So what can we make of the harder looking stage 15?

I see a battle among Diego Rosa, Koen Bouwman, Lennard Kamna, Bauke Mollema, Wout Poels going for a long shot and taking some big points, and at the end a stage win?Otherwise, we will see the GC riders fight with whatever they have left from Saturday.

Richard Carapaz – Dared to attack the GC Grp with 28 km left and also took the Maglia Rosa. This shows confidence. He also looked the strongest the whole day.

Vincenzo Nibali – he was able to follow the attacks well and gained time on Bilbao and Landa. The podium is on his mind.

Jai Hindley – 2nd on stage 14 and 2nd in GC but will he survive the high mountains?

Pello Bilbao – 6th on GC and can climb well if Landa falters.

Simon Yates has all the freedom in the world and is currently the best climber. He will win but the question remains as to how? From a break or with the main men. 177 km starting with 100km flat is hard race to control. I expect a big break away with riders like with no more hope for the general anymore. Everyone will try to tag along a team-mates. It would not be surprising to see even half of a team in it. Should it not be a break-away, the soft 22 km final is the perfect lauch pad for something spectacular from Joao Almeida.

Bauke Mollema and Giulio Ciccone freed from pink jersey duties would also like to try and win something on their own. Alejandro Valverde deceived by his day, is an old wise fox that can sneak something here.