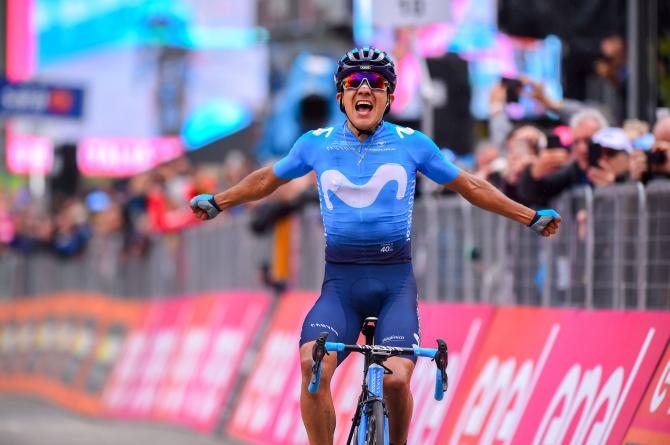 Richard Carapaz shot to the top of the Giro d’Italia overall standings on Saturday when he soloed to victory at the stage 14 summit finish.

The 25-year-old edged ahead of Primoz Roglic in the standings after breaking from the chief contenders on the Giro’s toughest climb yet, while Simon Yates was second after attacking on the last kilometre.

“I worked so hard for this, it’s a real dream come true,” said an exuberant Carapaz. “I felt good this morning. We knew the altitude was good for me. I gave it everything because I knew the entire Giro was at stake. The 30 seconds I gained on the penultimate climb were enough to allow me to build the lead I needed.”

Man-to-beat Roglic and two-time winner Vincenzo Nibali kept a close eye on each other all day with the Italian testing the Slovenian with a daredevil descent on the penultimate climb the Colle San Carlo.

It was on that hill that overnight leader Jan Polanc ran out of gas and gave up the pink jersey and lost almost eight minutes on the day.

The win and the show of power with which it was achieved, marks out Carapaz as a contender after he came fourth in the Giro last year.

He now leads Roglic by 7 seconds while Nibali is third at 1min 47sec.

Sunday’s stage is one of the longest on the Giro at 232km, starting with a 160km flat section before the race swings into a series of short but challenging climbs and descents which pundits feel may suit Nibali.