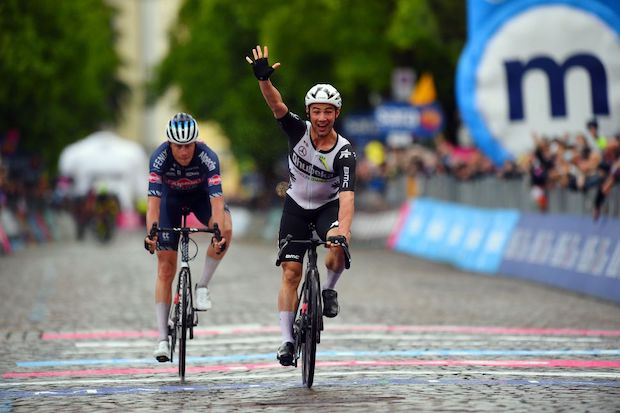 Victor Campenaerts won the 15th stage of the Giro d’Italia at the end of a breakaway, a 147-km bumpy ride from Grado as Egan Bernal retained the overall leader’s jersey on Sunday.

Campenaerts outsprinted breakaway companion Oscar Riesebeek after the duo had pulled clear late in the stage, which saw Bernal keep the lead advantage over Simon Yates.

“This morning at breakfast we said ‘what else can we do to make this Giro greater for the team?’ Three victories are just epic, we went all-in for today as it was the last chance to get a good result with the team we have”, said Campenaerts.

“We gave everything at the start, it was quite dramatic with the crashes. We were already away in the first few kilometres but we did the same thing again.

“Three guys in the breakaway and we were just so committed. We all had a good result and I took the victory. We try to give everything for each other and we did an amazing race. We were very motivated for the stage. Team Qhubeka Assos had a hard time to stay alive and we did. We now have three great victories from this Giro and I think this is an amazing chance to get a new sponsor for the team.”

After a body-punishing 14th stage to the Monte Zoncolan, the peloton let the 15-man breakaway loose on what appeared to be a recovery ride for most of the overall contenders after a crash-hit start.

Emanuel Buchmann’s hopes ended in a mass pile-up that forced organisers to neutralise the race for 15 minutes inside the opening three kilometres.

Buchmann, who was sixth overall, abandoned alongside Jos van Emden and Natnael Berhane, with Ruben Guerreiro withdrawing later after being unable to cope with the pace of the peloton.

Monday’s 16th stage is a 212-km mountain trek from Sacile to Cortina d’Ampezzo.