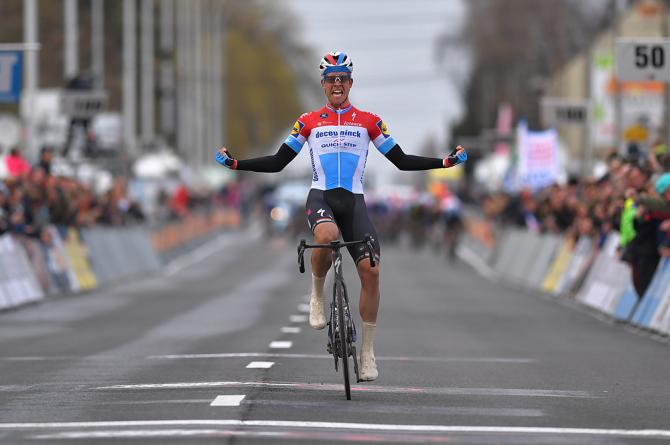 Deceuninck-Quick-Step doubled up on the opening weekend of the cobbled classics as Bob Jungels produced an impressive solo performance to win Kuurne-Brussel-Kuurne.

Jungels made his move with one lap of the closing circuit, kicking away from the remainder of the breakaway, which also included dangerous rivals Oliver Naesen (AG2R La Mondiale) and Magnus Cort (Astana).

The Luxembourg champion showed off his time-trialling prowess as he quickly built a significant lead before attacks from the peloton started to cut into his advantage.

The peloton inched agonizingly close to Jungels in the final run to the line, but he was able to sit up and celebrate with 100m to go, taking Quick-Step’s second win of the weekend.

“I was a bit too far away on the Kwaremont, but due to the headwind there was a regrouping,” Jungels said. “On the cobblestones of the Varent I wanted to thin the group and the five of us got away.”

“To win the second race I’ve done on the cobbles is quite extraordinary,” said Jungels. “We’ve won twice this weekend and the boss will be happy too.”

You can rewatch Kuurne-Brussel-Kuurne 2019 HERE.