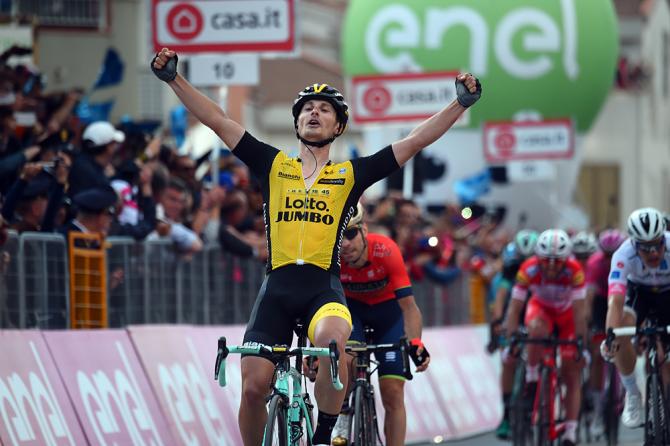 Enrico Battaglin (LottoNL-Jumbo) surged ahead at the perfect moment to win the fifth stage of the Giro d’Italia on Wednesday as Chris Froome and most of the other favorites finished in the main pack.

Giovanni Visconti (Bahrain-Merida) led coming around the final turn with 200 meters to go before Battaglin accelerated to take his third career Giro victory.

”The finish was a bit different to yesterday. Yesterday was really a powerful sprint on a really steep climb,” said Battaglin, who also won Giro stages in 2013 and 2014. ”Today was a steep climb but at two kilometers to go, and I had a little bit of time to rest and recover and do a really good sprint.”

Visconti crossed second and Jose Goncalves (Katusha-Alpecin) finished second, both with the same time as Battaglin.

The start of the stage was delayed for 15 minutes due to an accident on the racing route that left a motorcycle driver in serious condition.

”It was a nice day on the bike, on quite a slow pace because of the head wind,” said Rohan Dennis. ”I felt a bit of stress every now and then but I am glad to be in the Maglia Rosa. We’re only on day five, that means sixteen days to go. Tomorrow will be another story with the Etna. I’m looking forward to see how I’ll go up there.”

Stage 6 concludes with an arduous ascent up Mount Etna that should shake up the overall standings. Then the race heads over to mainland Italy and climbs up the peninsula to the defining legs in the Alps.

The only overall contender who struggled on Wednesday was Astana rider Miguel Angel Lopez, who misjudged a turn with six kilometers to go, rode straight off the road and fell into a patch of high grass. He finished 42 seconds behind.