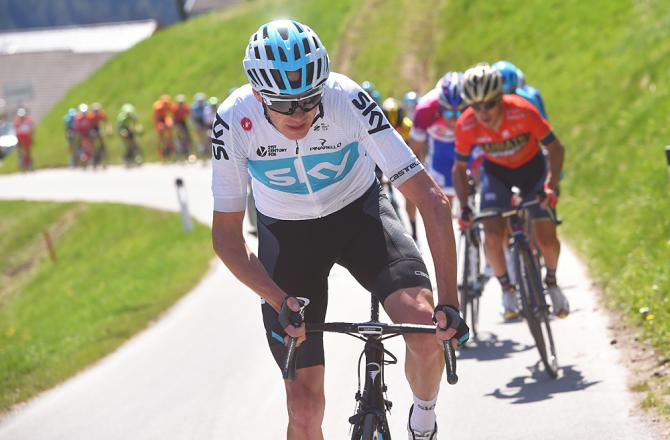 Chris Froome finished inside an elite group of front runners following a hectic finish to stage five at the Giro d’Italia.

The run into Santa Ninfa proved to be action packed with a punchy uphill finish testing the general classification competitors. Froome crossed the line 33rd on the day, collecting the same time as stage winner Enrico Battaglin (LottoNL-Jumbo).

That result ensures Froome held station on the general classification, moving up one place to 19th, 55 seconds back on the maglia rosa of Rohan Dennis (BMC) ahead of Thursday’s first summit showdown on Etna.

“That was a lot more straightforward than yesterday’s stage but it was still quite tricky. It sounded like there were a few crashes in the last 20-30km which shook things up a bit in the bunch”, said Froome.

“The team were really good today and did a good job keeping me right up front without having to do too much work themselves. Hopefully we’ve still got something left for tomorrow.

“Let’s see what happens (on Etna). There are a few different dynamics going on in the race at the moment. A lot of pure climbers who don’t really fancy their chances in the time trial against Dumoulin will be wanting to take time. It’s the first big mountain stage of the Giro and it could be very explosive and very active towards the final. Last year was a pure block headwind so it wasn’t so active – but I think this year will be quite different.

“For me I’m just hoping to get through the stage the best I can. Obviously I’ve lost a bit of time already but I’d like to start improving on that.”