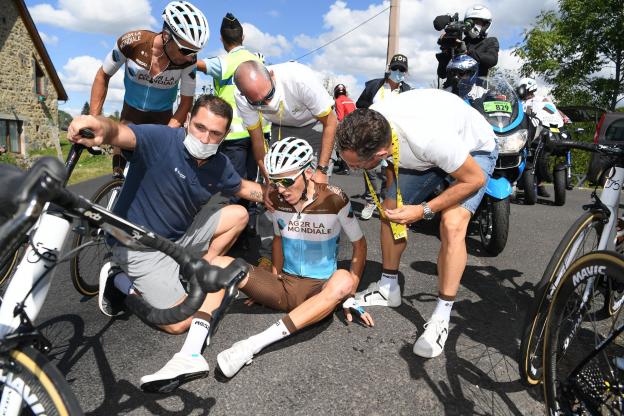 (Reuters) – Romain Bardet suffered a small haemorrhage following a concussion that forced him to pull out of the Tour de France.

“An MRI in the morning revealed has confirmed a small haemorrhage following the concussion,” Bardet wrote on Instagram.

The 29-year-old crashed with 87km in the 13th stage, getting back on his bike despite a bout of dizziness and lost 2:30 to overall leader Primoz Roglic, slipping down to 11th on the standings from fourth.

His AG2R La Mondiale team announced that he was pulling out after he was taken for an emergency scan that showed he had suffered a concussion.

Tour de France chief doctor Florence Pommerie said the nature of the sport made it almost impossible to detect a concussion on the spot.

“You’re always a bit dizzy when you crash at 40 or 80kph,” she told reporters. “We didn’t prevent him from racing because he was showing no clinical signs of a concussion.”

Team manager Vincent Lavenu said that the 2016 Tour runner-up showed the first signs of a concussion after the stage.

“In the car that took us to Clermont (from the Puy Mary), he asked us to stop and he vomited. We already had a scan but we went straight to the hospital,” he said.