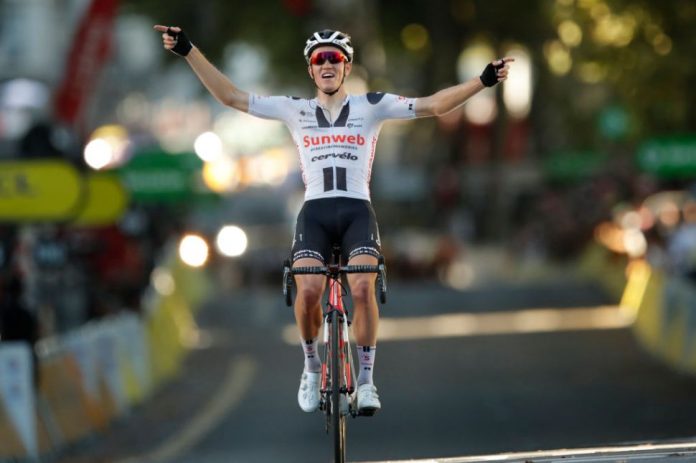 Søren Kragh Andersen attacked in the final kilometers of stage 14 of the Tour de France to take the second stage win for Team Sunweb in this year’s edition.

The rider from Denmark cruised to his biggest career win, smiling and sitting up in his saddle before crossing the finish line next to the River Rhone.

”I’m just amazed,” Andersen said. ”It’s always hard to say I am good enough before I have done it.”

Luka Mezgec crossed 15 seconds later to take the sprint for second, and Simon Consonni was third.

Sagan finished only fourth on a stage he targeted to close the gap in the points classification to green jersey wearer Sam Bennett.

Overall leader Roglic had a drama-free ride to keep the yellow jersey he claimed last Sunday. The former ski jumper stayed 44 seconds ahead of his fellow Slovenian Tadej Pogacar, and 59 clear of Egan Bernal, the defending champion.

”We didn’t have to ride the whole day but our guys did the perfect job,” Roglic said of his Jumbo-Visma team. ”Luckily we had everything under control.”

The yellow jersey battle is sure to reignite on Sunday. A 174.5-kilometer trek from Lyon ends with a gruelling ride up Grand Colombier in the Jura mountains suited to creating time gaps.

The Slovenia vs. Colombia contest atop the general classification will play out over two category 1 summits before approaching an even tougher final climb that stretches for more than 17 kilometers.