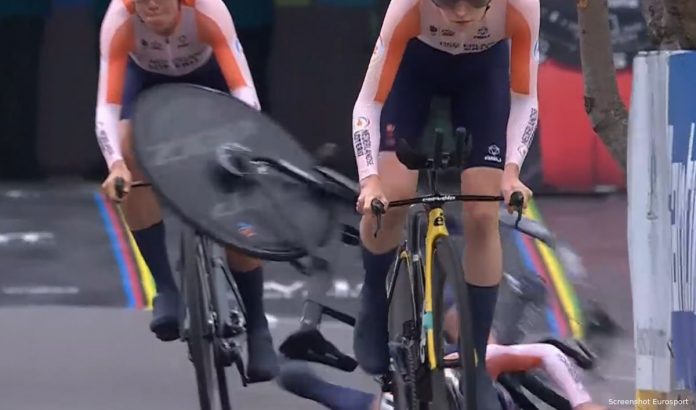 Annemiek van Vleuten crashed heavily just seconds after coming down the ramp in the time-trial mixed relay race at the World Championships.

Van Vleuten was second in the Dutchwomen’s pace line, only a few meters after setting off from the start ramp, when she lost control and hit the ground heavily. The Dutch rider was in shock and her right knee was bloodied as team staff rushed to her aid.

“On my way to the hospital for X-rays of my right side. All bruised and especially worried about my right elbow/arm,” Van Vleuten wrote on social media. “My front tire exploded and I crashed.”

The time-trial mixed relay has only been a world championship discipline since 2019, and sees three male riders set off for a first lap of the course followed by three women coming down the start ramp to ride a second lap once the men cross the finish line.