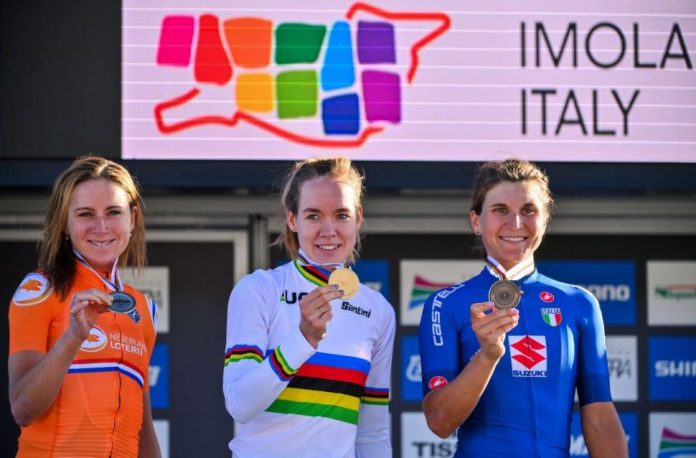 Anna van der Breggen made it two wins out of two at the Road World Championships, adding the women’s road race title on Saturday to her time trial gold medal.

Van der Breggen became the first rider to win both races at the same championships since Jeannie Longo in 1995.

”It’s incredible. It was a really hard race, fighting from the beginning,” she said. ”The climbs were really tough and on the penultimate lap I felt strong and we discussed in front trying to make the race hard. We did it and I just went for it.

”I thought that in the last lap everyone would be tired and that it would be difficult to make the difference on the climbs so I went but it was really far.”

Van der Breggen’s compatriot, defending champion Annemiek van Vleuten, edged out Elisa Longo Borghini of Italy in the sprint for second. They were 1 minute, 20 seconds slower than Van der Breggen at the end of the 143-kilometer race which started and finished on Imola’s auto racing circuit.

Van Vleuten was riding with a special brace after having a metal plate inserted into her wrist following a crash at the Giro Rosa nine days ago.

”I’m really happy. I never expected this,” Van der Breggen said. ”It’s incredible. The season has been incredible so far.”

On Saturday, Van der Breggen attacked with 41 kilometers remaining and rapidly built a significant advantage. She had a lead of more than 1 1/2 minutes heading into the fifth and final lap of the circuit, which featured two steep climbs on each lap – the Mazzolano and the Cima Gallisterna.

Van der Breggen stretched that by a minute as she crested the final climb, 12 kilometers from the finish.

And she started smiling as she rode to the finish line, before sitting up and raising her arms over her head as she crossed.

The men’s road race is on Sunday.