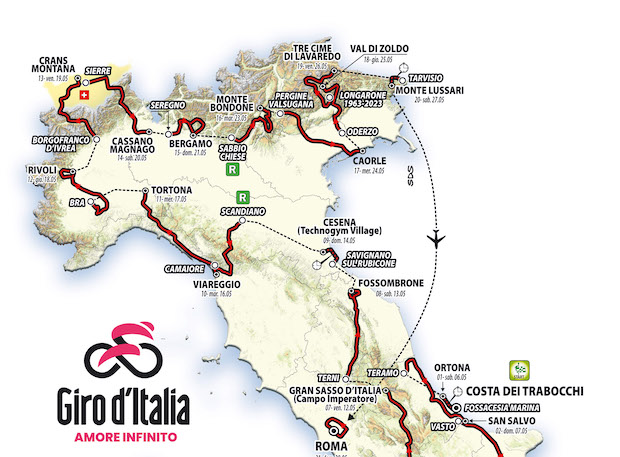 The 2023 Giro d’Italia will finish at Rome’s iconic imperial forum, five years after poor road conditions led to the final stage in the Italian capital being cut short.

The Italian Grand Tour suffered embarrassment in 2018 when only three of the 10 laps of the final stage in central Rome were counted as the route was considered too dangerous. Next season, 21st and final stage will take in some of Rome’s most famous sites, including the Colosseum, Circus Maximus and the Spanish Steps.

Riders will arrive in Rome after over three weeks of gruelling competition spread out over 3,448.6 kilometres and 51,300 metres of climbing.

The race, whose route was unveiled in Milan, gets underway on May 6 with the ‘Grande Partenza’, an 18.4km individual time-trial along Italy’s Adriatic coast between Fossacesia Marina and Ortona, in the central Abruzzo region.

That is one of three time-trials in next year’s edition, including the penultimate stage, a tough 18.6km run with a steep climb of 7.5km to Monte Lussari which will be the last competitive stage of the race.

The second stage will stay in the region, a 204km run from Teramo to San Salvo which features relatively gentle climbs and will be the first of eight stages to favour sprinters.

Riders will return to Abruzzo for the seventh stage which will host the first of seven summit finishes of next year’s Giro, at Campo Imperatore in the Gran Sasso d’Italia massif.

The Giro will be raced almost entirely on Italian roads after last year’s start in Hungary, although the riders will head into Switzerland for the Crans Montana finish of the 13th stage, which will also feature the highest peak at Col du Grand Saint-Bernard.

The general classification could well be decided by the end of stage 19, which features five category climbs as the riders push the 182km from Longarone to Tre Cime di Lavaredo.

This year’s Giro was won by Jai Hindley, the first Australian ever to win the race.