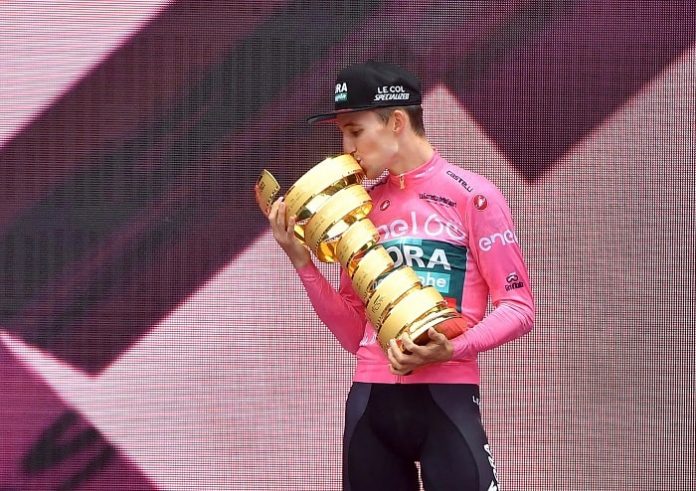 Jai Hindley won the Giro d’Italia on Sunday after making his way through the final stage time trial in Verona to claim his first Grand Tour.

Hindley put himself in an almost unassailable position when he snatched the pink jersey from Richard Carapaz on the final climb of Saturday’s brutal mountain stage.

The Australian had a cushion of almost a minute and a half and rolled triumphantly into Verona’s ancient Roman Arena after easily holding off his Ecuadorian rival.

Matteo Sobrero took the honours on the final stage on a cool day in northeastern Italy, setting the fastest time of 22 minutes 24 seconds early in the day.

“It’s an amazing feeling, I still need ot recognise everything,” Sobrero said. “I’m really happy with the team, we win on the first day and we win on the last day. All the work is paying off.”

Hindley banished the memory of his gutting final stage defeat in 2020, where his weakness in time trials cost him the overall victory at the death. Having taken the pink jersey also in that year’s the 20th stage he was pipped in the climatic time trial in Milan by Tao Geoghegan Hart.

“It’s a beautiful feeling,” Hindley stated. “A many emotions that are out there. I was thinking in my head what had happened in 2020 and I was not going to let it occur again I’ll be honest. Being able to win is really amazing.

“I was receiving updates and I was feeling pretty comfortable on the bikeI didn’t really feel like I was struggling and I was confident that it was a great ride.

“I wanted to take the descent pretty cautiously but then I just gave it everything to the end. I’m really proud to be Australian and happy to take this one home.”

Mikel Landa took the last place in the general podium just behind Hindley and Carapaz. He was ahead of two time Giro champion Vincenzo Nibali in fourth, in his last Giro.