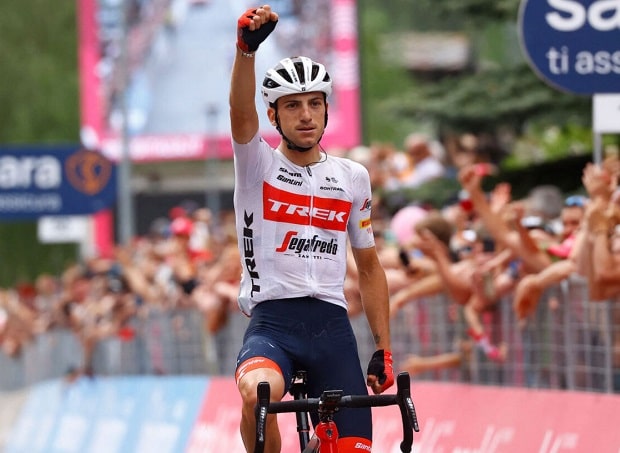 Giulio Ciccone won the 15th stage of the Giro d’Italia on Sunday after a solo attack on the final climb with Richard Carapaz holding the leader’s pink jersey heading into the final week.

You can rewatch STAGE 15 HERE

Ciccone was part of a breakaway group with no overall contenders, crossing the finish line 1min 31sec ahead of closest rival Santiago Buitrago after making his move with just under 20km to go.

Carapaz holds the race lead he grabbed on Saturday after the 177-kilometre run between Rivarolo Canavese and Cogne.

“This is my most beautiful win,” said Ciccone. “It’s better than the yellow jersey at the Tour de France, better than my first wins at the Giro because I went through difficult times in the past two years, with crashes, illnesses and Covid.”

Ciccone was the winner of the mountains classification of the 2019 edition of the Giro which Carapaz won.

On Sunday, the 27-year-old burst away from Hugh Carthy and Buitrago with the trio on the ascent to the summit finish in Cogne in the Aosta Valley.

“Today I felt strong,” explained the Italian. “I chose to attack solo with 19km to go because it was the steepest part of the climb and I wasn’t sure if I’d be able to drop everyone later on.”

On a quiet day for the general classification, Carapaz stayed in the main peloton, which contained all the main men and was several minutes back when Ciccone crossed.