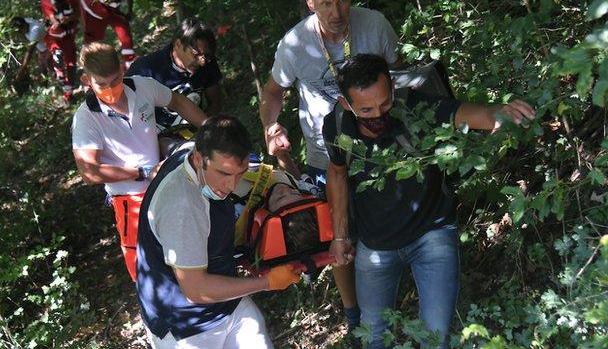 Il Lombardia favourite Remco Evenepoel was taken away in an ambulance after a frightening crash into a ravine during the Italian monument on Saturday.

Evenepoel was part of the leading group descending off the Colma di Sormano, when he struck the wall of a bridge. He flipped over the edge and into a ravine that was hidden by trees.

Evenepoel, 20, already has nine wins under his belt this season, more than any other rider.

“We didn’t see the fall ourselves, we only heard about it on the race radio. When we saw that Remco’s data had stopped, we already thought it was him. When we got there, all I saw was his bike. A bike without a rider, that’s not a pleasant sight,” Deceuninck-Quick-Step directeur sportif Davide Bramati said.

“I walked straight down and quickly saw that he was okay. He could talk and said he had pain in his right side. He’s in the hospital now, with the doctor, Patrick [Lefevere] and his family. I think he’ll be all right. But may the bad luck stop for us now”.