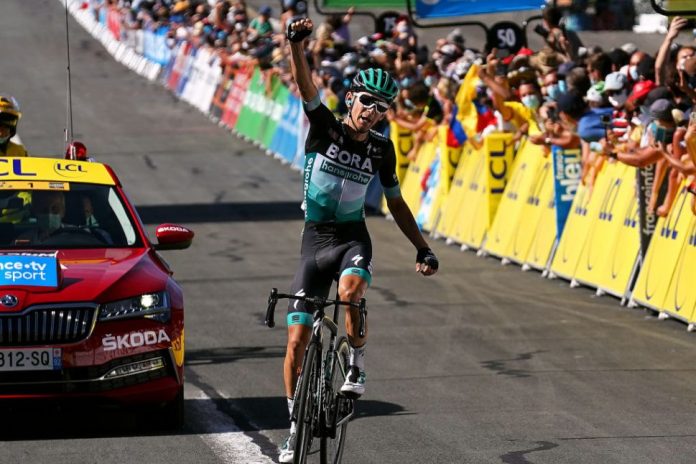 Bora-hansgrohe’s Lennard Kämna has taken the victory in the fourth stage of the Criterium du Dauphine as Primoz Roglic maintained the overall lead.

The young German rider attacked from a powerful breakaway group on the final climb of the day to take his first professional victory. He was able to fend off a chase from David de la Cruz (UAE Team Emirates), who took second, and Julian Alaphilippe (Deceuninck-Quick-Step) won finished third.

The GC group rolled in together three minutes behind, all on the same time. Primoz Roglic retained his overall lead despite suffering a nasty crash in the stage, and is now 14 seconds clear of Thibaut Pinot in the standings.

The day saw three of the top riders drop out of the race: Egan Bernal (Team Ineos), Steven Kruijswijk (Jumbo-Visma) and Emanuel Buchmann (Bora-Hansgrohe) all abandoned.

“I was a forward pawn for Buchmann, who wanted to attack on the penultimate climb. He dropped out, so I could go for my own chance,” Kämna said. “Winning in the Dauphiné is a very big thing… I am very happy that I booked my first pro victory here.”

“I have to enjoy myself now, but I hope that Buchmann will be fit for the Tour in time.”