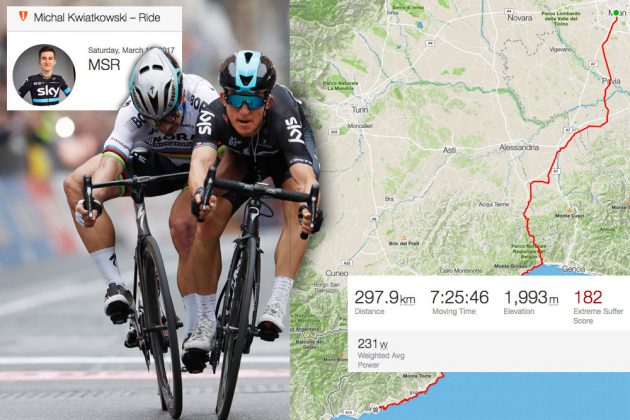 Power is the rate at which energy is used (energy over time) and is measured in watts.

In cycling, energy is expressed in terms of work. It’s a constant snapshot of your work rate at any given moment. It’s the building block from which all power-based training flows.

A watt is a watt, whether on a bike or powering your home. So when Marcel Kittel unleashes 1,900 watts in a sprint, he could essentially power two houses at normal consumption level. Another comparison: 1 horsepower is 746 watts.

For decades, cyclists measured their performance by looking at miles per hour or heart rate. In the 1990s, elite cyclists switched to measuring their power output in watts. Since the late 1980s, companies including SRM, Powertap and Ergomo have made these devices, which measure the deflection of the crank arm using minuscule gauges or in some cases employ a specialized wheel hub.

A handlebar computer displays and stores the data. Whereas an average cyclist can produce 100 watts, a pro cyclist can average 400 watts over the final hour of a Tour de France stage.

Training intensity is the toughest variable to measure. Speed is a poor measure, as it relates more to terrain and wind. Heart rates provide a rough gauge, but they vary in response to temperature, humidity, altitude, hydration, fatigue, caffeine intake and exercise duration.

Energy delivered to the pedals and measured in watts measures the intensity of your work. Measuring power allows you to monitor your training, characterize your practice course, assess your aerodynamic sleekness and drag, and assist in pacing.

Wattage figures measure the work of applying energy to the pedals but not the total physiological energy expended to perform the task. Cyclists are about 21 to 24 percent efficient in converting chemical energy to mechanical energy during cycling, so a cyclist riding at 250 watts is expending metabolic energy at a rate of nearly 1,000 watts, or 1 horsepower.

The advantage of power monitoring is that “watts don’t lie,” writes Selene Yeager in “Every Woman’s Guide to Cycling.” Wattage figures stay exact, unlike heart rate. If you ride your standard circuit and average 160 watts where before you only managed 125, you have gotten stronger, she indicates.

To measure your wattage, you warm up and ride for 20 minutes at the highest power you can maintain. You reduce that number by 5 percent to arrive at your lactate threshold power, which is the wattage you can maintain for about an hour. With your coach, you then set up training zones of varying duration and watts.