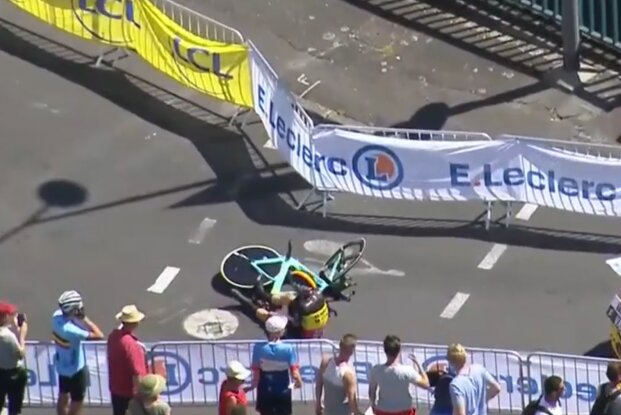 Wout van Aert has been forced out of the Tour de France with a leg wound after he plowed into a roadside barrier and crashed in a right-hand curve close to the finish of the time trial in Pau.

Van Aert had been one of the quickest riders Friday on the 27.2-kilometer route course before catching the barrier and hitting the deck. Medics treated him at the side of the road and then transported him away by ambulance.

His team, Jumbo-Visma, said he was conscious but out of the Tour with a flesh wound on his right upper leg.

Oh no ? Wout van Aert hits a fence in a turn in the final of his time trial. Seems tot be the end of his first Tour de France. ? #TDF19 pic.twitter.com/0E3MdRWjdt

The crash marked an end to van Aert’s impressive debut in the Tour. He was a member of the Jumbo-Visma team that won the team time trial on stage 2 in Brussels. Van Aert then added his own name to the list of Tour victories, winning a bunch sprint on stage 10.