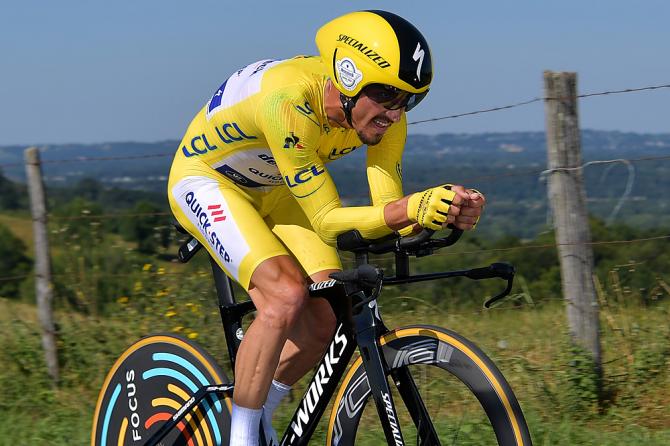 Julian Alapahilippe extended his overall lead at the Tour de France on Friday winning the 27.2km individual time-trial at Pau on stage 13 to keep the yellow jersey and send his home fans wild.

Thomas dropped 14 seconds on Alaphilippe to slip to 1min 26sec adrift in the general classification after the baking hot race-against-the-clock around the Pyrenean town.

“If he carries on like this he’ll win the Tour,” Thomas said at the finish line.

The Welshman then told British broadcaster ITV that Alaphilippe’s barnstorming ride had taken him by surprise.

“He’s going incredibly well and is certainly the favourite or the one to watch at the moment,” he added. “But there is a long way to go and a lot of hard stages to come.”

“I just wanted to keep the jersey, but to win the stage, on this form, is just totally amazing,” said Alaphilippe, the 27-year-old former soldier who is sending France wild with belief they can win a first Tour since 1985.

Thibaut Pinot was just behind these riders at 49sec, looking happy and relaxed.

There were gasps and cries of horror when Wout van Aert fell in the home straight after getting caught up in the barriers and twisted his leg before being taken away in an ambulance.


Saturday’s stage 14 is a short 117km run over two Category 1 mountains with a summit finish at the fearsome classic Tour de France destination the Tourmalet, which some translate as ‘bad trip’ and which is the highest mountain pass in the Pyrenees.