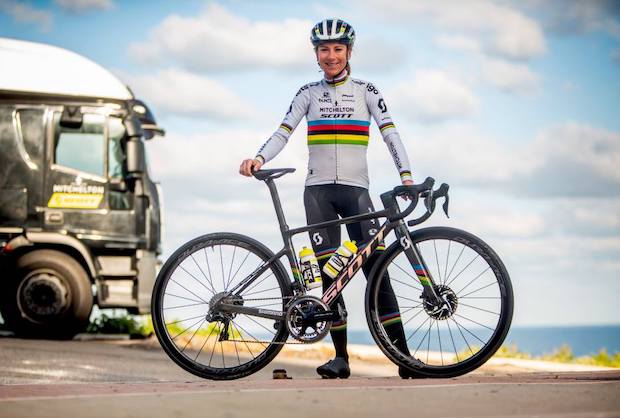 “I’m really looking forward to improve together with the whole team, and enthusiastic about what lies ahead with them,” van Vleuten said. “I hope they can help me becoming even faster, also on the TT bike, in combination with Canyon, which looks like a high-end bike to me.”

Van Vleuten makes the move after five years with Mitchelton-Scott, period in which she dominated women’s cycling, winning two editions of the Giro Rosa; two editions of La Course and three world titles.

“I’m not the youngest in the team anymore, but I’m super ambitious, and want to perform well for this team,” van Vleuten said. “I’m not thinking about the end of my career yet – I’m thinking about how to improve. I hope joining this team, this new environment, can help me find new energy. Other than performance, I see this as an opportunity to join a group full of great talents, young girls, that, after these three years of growth for the project, can benefit from those small things — advice — that a rider like me can possibly give them to take the next step.”

“I got to know the team better as I shared training rides with them during my altitude camps in Sierra Nevada (Spain), back in 2014,” she said. “I really liked the experience; it felt like a ‘Spanish family’ for me, I felt really welcomed by them as they were the first professional men’s team that invited me to join them in endurance training. The atmosphere with them was so relaxing: no stress on the training, waiting for me after the climbs, and also every evening, staying together after dinner, even playing table tennis with Alejandro Valverde! (laughs)

“With regards to the women’s team, it feels the same – I look at them like a great group of girls, with the same culture as what I saw in Sierra Nevada. It’s a project that attracts me, as much as I’m looking forward to working with the head of performance Patxi Vila.”