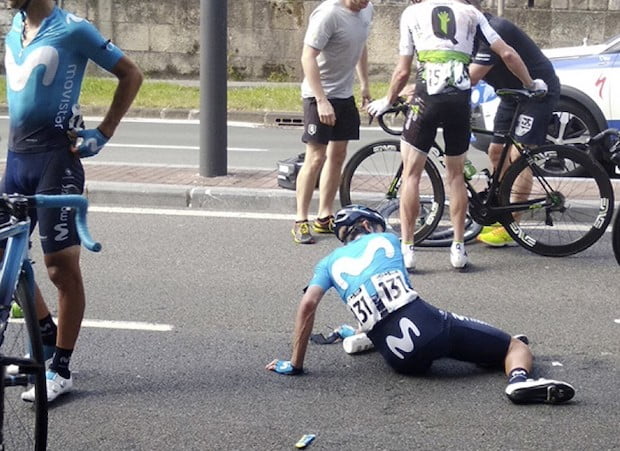 Mikel Landa featured in the first group after crosswinds decimated the peloton on the run-in to Albi during stage 10 of the Tour de France.

However, the Spanish rider was again unlucky as he crashed in the final 20km of the stage when Warren Barguil lost balance next to him knocking Landa off the road. The Movistar leader crossed the line with a 2:08 deficit.

Really sorry for what happened to @MikelLandaMeana , but please watch again I’M NOT the rider who push him in.

“It was a ‘shock’,” Landa said in a statement released by his team. “At one moment I was on my bike, and at the very next one I was on the ground surrounded by spectators. Fortunately, I have no injuries. I was able to continue in one piece, and my teammates really helped me a lot in a difficult situation. It’s ‘just’ a time loss – and the goal we came here for further away.”

“I am sorry about Mikel Landa’s fall,” Barguil said in his Twitter feed. “I went off balance after I touched wheels with Julian, I touch Mikel who was coming up on my left hand side. It was very fast, it wasn’t voluntary. I was lucky enough not to crash, but that wasn’t the case for Mikel. I hope he’s all right.”