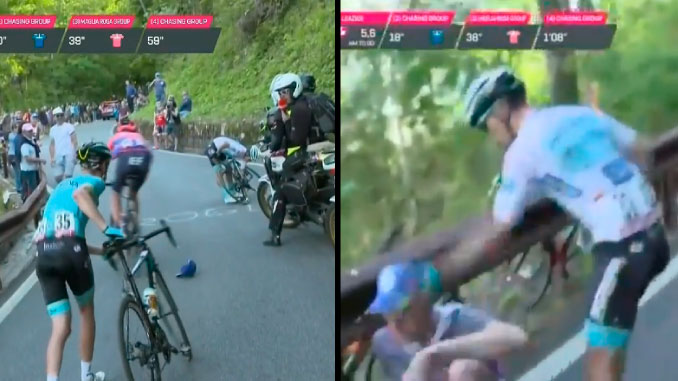 Miguel Angel Lopez lashed out at a spectator who made him crash on the final climb of the Giro d’Italia on Saturday.

The 25-year-old hit out twice at the man who cowered on the ground faced with the fury of the Astana rider.

"That's not the reaction you want but you can understand the anger!" ?

Unbelievable scenes as @SupermanlopezN HITS OUT at a spectator who knocked him off his bike just before the final 5km ?#Giro #Giro102 #TheBreakaway pic.twitter.com/jgw4e7JZME

The crash occurred on the final climb at Monte Avena, some six kilometres from the finish line, of the 20th and penultimate stage through the Dolomites in northern Italy.

A clearly frustrated Lopez got back on another bicycle but finished in 18th position, 1min 49sec behind teammate Pello Bilbao who won the stage.