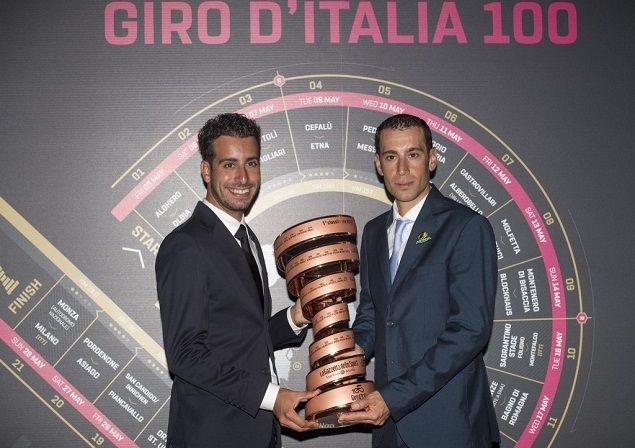 The winner of the last edition of Giro d’Italia, Vincenzo Nibali, said: “It’s a very hard Giro with two very important time trial stages. In this respect it’s very balanced and similar to the ones I’ve won in the past. This Giro will require a lot of energy and you’ll need to be ready from the start.”

The Sardinian champion, Fabio Aru, said: “The Big Start from Sardinia is really emotional for me, I still remember the last time when Giro started from the island, I was a kid and had just started racing MTB – I stopped alongside the road to watch the stage. It’s a truly beautiful edition of the Giro that will be uncertain until the end, the fans will see a great show!”

Multiple Grand Tours winner, Miguel Indurain, said: “For me the Giro was always very important,because, in addition to Banesto, all my team’s top sponsors were Italian. In my career I found that you can have friendships with your rivals, even when you compete on a Giro stage, at the end there is always respect – at least there was among the cyclists of my era. Among the cyclists with whom I raced in the Giro, I remember the young Pantani in 1994. Marco was very young but already strong on the climbs, I remember well when he attacked on the Mortirolo stage. Marco was a very shy person, very strong in the mountains from the beginning, but then he improved in the other specialties.”

The record-holder of stage victories at the Giro with 42, Mario Cipollini, said: “Based on my experience as professional cyclist I can say that Stage 4 will be very important. The Mount Etna finish will be a defining moment of the race: you’ll need to be on top form from the first stage onwards, and you cannot wait until the second week to get in good shape. The first mountain finish will surely tell us who’s going not to win the Giro.”