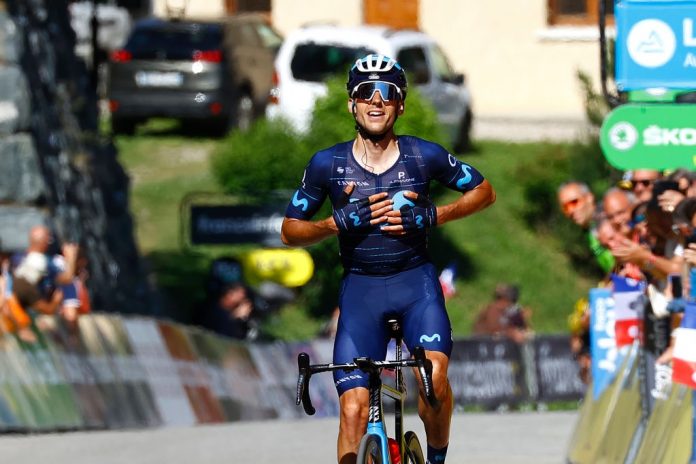 Primoz Roglic seized the overall lead of Criterium du Dauphine after finishing second, 13sec behind to Carlos Verona in a gruelling Alpine slog on Saturday.

Roglic launched a sudden attack on the last of three climbs and leads his own teammate Jonas Vingegard by 44sec in the overall standings.

Ben O’Connor was third in the stage and climbed to third overall at 1min14sec.  Tao Geoghegan Hart finished a few seconds adrift.

Overnight race leader Wout van Aert was detached on the second of two HC climbs at around 32km to go, but Jumbo-Visma keeps the maillot jaune aboard its bus heading into the final stage Sunday.

For Verona it was a first ever professional win.

“It’s been 12 years as a pro for me, already; I think I always performed decently, improving constantly, but I always lacked a victory, I was never the winning kind of rider,” said Verona.

“I’ve gained confidence over the last few years, I came close quite a few times -twice 3rd in TDF stages, 2nd at La Vuelta last year-, and when I was into the breakaway today, I said: ‘It has to be today!’. I knew the finish, because we came to the Alps to recon Tour stages and we took advantage to check this course with the team. I’ve got so much to thank for to Gregor Mühlberger, because he worked so hard for me into the escape. We made the right moves, the legs were great, and in the end, opening my victory account – I’m just so happy.

Sunday’s final test culminates in an 11km climb at 9 percent gradient on a 138km stage with four mountains.