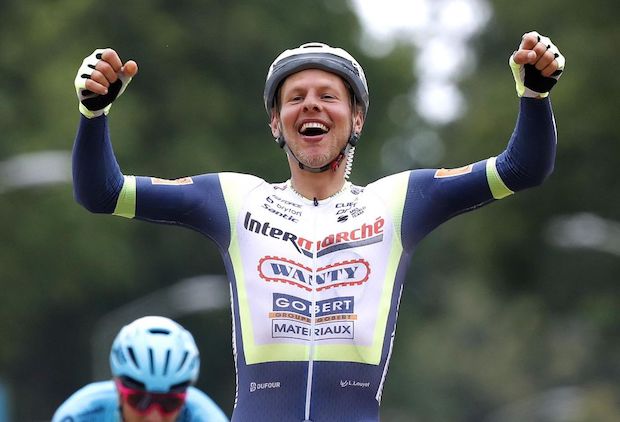 Taco van der Hoorn took again a surprising victory in stage 3 of the Benelux Tour following a breakaway, while Stefan Bissegger maintained his lead in the general classification.

You can rewatch STAGE 3 of 2021 Benelux Tour HERE

The Dutchman was involved in a six-man attack which formed early on in the stage, which began in Essen in Belgium and finished in the Dutch village of Hoogerheide.

The group collaborated effectively to navigate the narrow twisting route as the sprint teams were hesitant to go on the offensive.

The peloton closed a one-minute gap in the final 10 kilometres, but the breakaway stayed clear, with Van der Hoorn leading and winning the sprint for the line. Mathias Norsgaard finished second after making several late attacks, with Luke Durbridge claiming third place.

“I saw yesterday that some riders wanted to go in the breakaway today. There wasn’t a big gap but the final was difficult for the peloton to control,” Van der Hoorn explained.

“When I saw the break going, I knew I had to be in it. Then we did everything tactically perfect, with some strong guys in there. In the end, I finished it off in the sprint, which I didn’t really expect but it worked out for me.”

It’s the second huge victory for Van der Hoorn this season after he took a stage win in the Giro d’Italia.

🎥Recap of stage 3 of the #BeneluxTour from Essen to Hoogerheide in 55 seconds pic.twitter.com/DUTgY97BJA