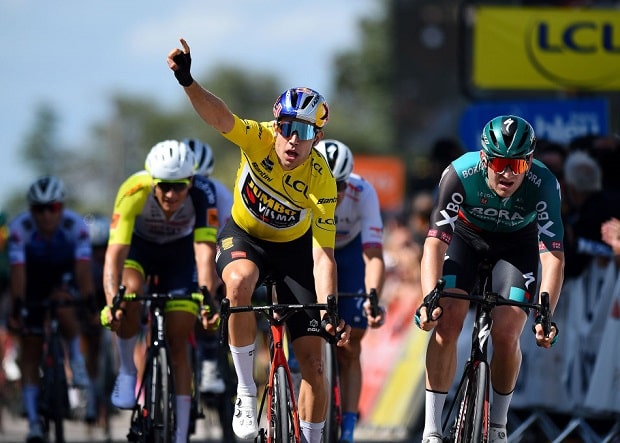 Wout van Aert sprinted to victory in the fifth stage of the Criterium du Dauphine on Thursday to consolidate his lead in the overall standings.

It was a second stage win for the Belgian champion, coming four days after his victory in the opening sprint stage in Beauchastel.

Van Aert was made to work for the win, however, edging fellow Belgian Jordi Meeus by a third of a wheel at the end of the 162.3km stage that was almost witness to an unlikely heist.

“It was a nervous final. In the beginning, it looked like the first controlled stage and we had the breakaway in check but they started to speed up and we kept losing ground so, in the final kilometers I was stressed that we would be just too short to catch them but, in the end, I passed them a few meters before the line and I could just win,” Van Aert said at the finish.

“I have to thank all of my teammates. I know that everybody says this after a victory but if you watch today all six others were there for me and it makes this victory for me even more special.

The peloton left it incredibly late, at under 1km from the finish, to reel in a four-strong breakaway group comprising Sebastian Schoenberger, Jan Bakelants and the French pair of Fabien Doubey and Benjamin Thomas.

In a thrilling finish, Van Aert bolted past the quartet who had broken clear at the 30km mark, taking Meeus with him, Ethan Hayter left to round out the podium.