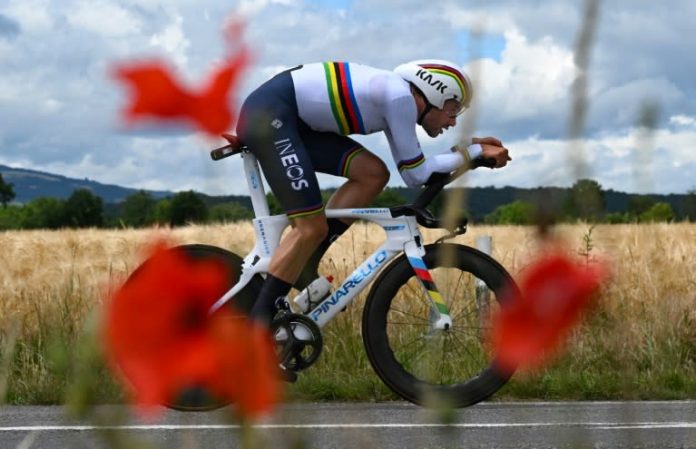 For Van Aert this was a second runner-up spot in two days after he celebrated too soon on Tuesday’s hilltop finish and was pipped at the line by David Gaudu.

Van Aert, however, not only retains the overall leader’s yellow jersey, he moves some 53sec ahead of Mattia Cattaneo in second and 56sec ahead of Primoz Roglic who is third.

“It’s a time trial, it’s always honest. Only two seconds, it’s not a lot but it’s a difference. I got beaten by the world champion – I like to win but I have to accept it,” Van Aert said.

“I’m really pleased with how the Dauphiné’s going, it’s been a really good race for me – I have this nice jersey and will try to enjoy it the next couple of days.”

Roglic was fifth on the day and his Jumbo-Visma teammate Jonas Vingegard was seventh. The pair are well placed for a tilt at the title in the eight-day race, which is generally a mountain test but this year featured the potentially pivotal time trial.

Thursday’s stage five is relatively flat, Friday sees a return to the hills and the two concluding stages at the weekend take on 1,500m altitude mountains.