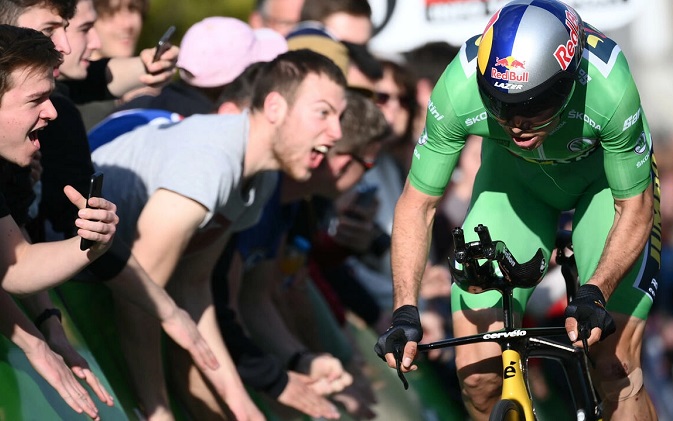 Wout van Aert led a Jumbo-Visma podium sweep in the Paris-Nice time trial on Wednesday as the Belgian powered uphill to the finish to complete the 13.4-kilometre ride in Montlucon in 16min 20sec.

“I hope to wear this jersey as long as possible, before Primoz takes it,” said Van Aert.

Van Aert took the overall lead from another Jumbo rider, Christophe Laporte, who had been in yellow since Van Aert and Roglic waved him across the line first following a three-man Jumbo breakaway on the opening stage.

Roglic trails Van Aert by 10s overall, with Laporte next at 28s. Yates is fourth at 49s.

Yet, apart from the 15km ascent to the Col de Turini finish on Saturday, which should suit Roglic, the rolling profile of the other three stages should be suited to the Belgian.

But, Roglic is the team leader and has unfinished business. Last year he started the final stage comfortably ahead, but fell twice as Maximilian Schachmann took a second straight Paris-Nice.

Thursday’s stage 5 follows the Loire to the Ardeche and then climbs the Col de la Mure, 33 kilometres from the finish in Saint-Sauveur-de-Montagut.