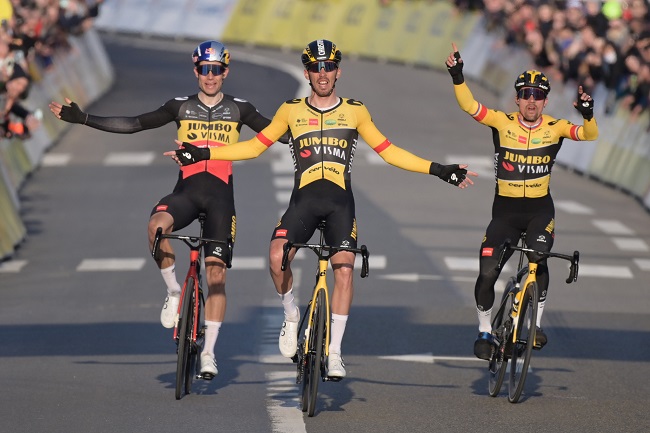 Primoz Roglic and Wout van Aert stepped aside at Paris-Nice on Sunday and let new team-mate Christophe Laporte win stage 1 and the yellow jersey after dropping the peloton in a stunning attack.

The flat opening stage of the eight-day race had been set up for a likely bunch sprint, but the Dutch team, packed with powerful riders, broke away 5km from home on a small incline and the trio eventually crossed the line 20 seconds ahead.

Senior riders Roglic and Van Aert had a brief chat and then told Laporte, on his first big race in his first season with Jumbo to edge a ahead and take the honours.

“I have to thank the team. They told me in the final kilometre that it was for me, so it’s really a nice gift for me,” Laporte said.

“I’ve won my first Paris-Nice stage and I’m in the yellow jersey. If someone had told me that at the start of the day I wouldn’t have believed it. To go to the finish with three, it’s incredible. The work we’ve done has paid off.”

Monday’s second stage runs through the vast agricultural plains between Paris and Orleans, and may also be decided by a breakaway of some kind.