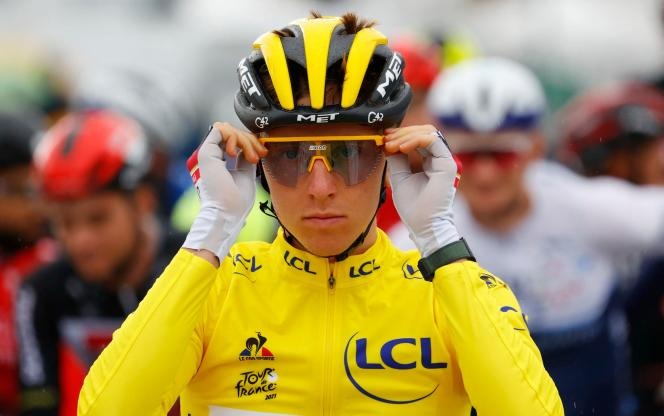 The Tour de France for this year is fast coming to a close, with Stage 18 of 21 beginning tomorrow (Thursday 15th July) and stage 17 finishing today, but how did stage 17 go? What are the standings looking like, who do we think is going to push on for the win? We’ll go over all that here!

First up, Stage 17, Muret to Saint-Lary-Soulan Col du Portet. A mountain stage that is 178.4KM in distance. Up stepped defending champion, Tadej Pogacar to claim his FIRST win in the yellow jersey for this year’s competition and his 5th stage win of the year!

There were 145 riders that took part in stage 17 with the first rider to take the lead being Pierre Rolland who managed to hold onto the lead for a respectable 13 kilometers, unfortunately for him the race was much longer than that. A few other riders took their turn in the lead with a bunch of them building a gap around 18k. Van Poppel won the intermediate sprint at Bagnères-de-Luchon where Michael Matthews won the sprint of the peloton ahead of Mark Cavendish.

The Slovenian Tadej Pogacar had previously won the stage five time trial before taking the yellow jersey on stage eight now has 4 days left to defend it. So how did Tadej claim this win? Well it was close I’ll tell you that. “We were 50-50 – do we go for the win stage or just defend? – but in the end we tried and I am super-happy,” he said. After pushing to victory ahead of Jonas Vingegaard and Richard Carapaz with 150 meters to go. Carapaz had seemed like he was exhausted, staying on the heels of his rivals for most of the climb, until he tried one last surprise push in the last kilometer, however it wasn’t to be and he couldn’t quite catch Pogacar out!

“Jonas said to me that he thought Carapaz was bluffing and I knew it also,” Pogacar explained. “It was nothing unusual – this is the tactic in cycling and he tried to attack. I had the drive to catch him but it was super hard. It was a fantastic day. To win in yellow is something I cannot describe.” So all in all, a pretty good day for Tadej! What do you guys think? Is he going to be able to hold on? All the best betting sites have got him as their favourite, is he yours? Let us know!

Next up we’ll take a look at stage 18, what can we expect? Well, Stage 18 is the Tours final day in the mountains and it features arguably two of the most famous climbs in the Pyrenees. The Col du Tourmalet and the climb to the ski station at Luz Ardiden. Unfortunately for the riders, the stages REAL tough climbing comes at the end of the day.

The run starts in Pau with two category 4 climbs in the first half, the first coming after 10.6KM of the race  and the other comes before Pouzac’s Intermediate Sprint which is 54.6KM into the stage. Once you’re through the other side of the Intermediate Sprint, you’re going to be looking at around 25km to the base of the day’s FIRST major challenge. That would be the Hors Categorie Col du Tourmalet which is 17.1km at 7.3 percent. A long descent into the valley will give the cyclists a chance to recoup and catch their breath and hydrate etc. Which will be needed to finish the final summit, the Hors Categorie climb to Luz Ardiden, a 13.3km 7.4% climb to the ski resort high up in the Pyrenees.

Is Mark Cavendish going to keep hold of the green jacket? Will Tadej Pogacar add yet another win to his list for the season? We only have 4 stages left and things will be heating up going into the last few stages. Around 470km remains, I still find it incredible what these cyclists are capable of, personally I’m tired out just cycling 5 miles to work.

And that about covers it, what have you made of the Tour de France so far, are you a regular viewer? Are you a psychotic fan like that woman who caused that  crazy crash last month? Are you new to the world of competitive cycling? There is plenty to get lost in within the cycling scene and the events come thick and fast, not to mention we have the olympics coming up soon also! The velodrome is always one of the most insane parts of the Olympics for me, the speeds they clock in that place with just them and a bike is baffling. Anyway, like I said, the Tour de France is almost over so let’s enjoy it while it’s still here! Take care everybody!