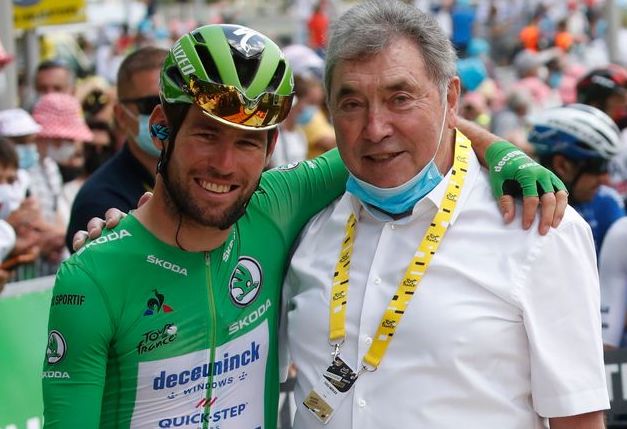 For the second time in his career, Mark Cavendish has won the green jersey at the Tour de France.

After equalling Eddy Merckx’s record of 34 Tour stage victories earlier in the race in Carcassonne, Cavendish was denied another piece of cycling history on the last day of racing.

“I never imagined I would be again wearing green on the Champs-Élysées, but here I am, thanks to the amazing riders and staff of Deceuninck-Quick-Step. They were a big part of this success and together we’ve been through so many emotions”, said Cavendish.

“For me, to be back at this race that I love so much and do what I did was a dream. I am incredibly happy that I have my family here, as I haven’t seen them in the last five weeks and it feels great to share with all of them these unforgettable moments.”

Wout Van Aert had joked he would do his best to defend Merckx’s record for Belgium, and though he could not stop Cavendish equalling it, the Jumbo-Visma rider was there to make sure it was not broken on the Champs-Elysees.

The stage win added to the remarkable salvage job Jumbo-Visma have done in this Tour after losing leader Primoz Roglic in the opening week – having now won four stages and taken second overall through Jonas Vingegaard, all despite only finishing with four riders.