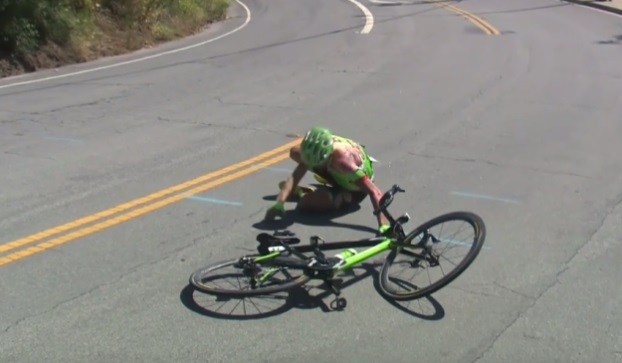 Toms Skujins took a heavy fall while riding in the breakaway during the Amgen Tour of California’s second stage on Monday.

“I’m feeling all right,” Skujins said Monday night. “I’m really bummed, of course. Besides that, I’m healthy. I’m good. We’ll assess with the team doctors and figure things out moving forward. Thank you to all the messages from my fans and my friends — but I won’t be able to answer them because I shouldn’t be looking at my phone.”

I would never suggest getting in a fight with tarmac because you will loose. pic.twitter.com/YCqHNbgwDc

Sport director Tom Southam: “Toms’ crash obviously had a huge impact on us today. It was a high-speed crash and unfortunately it happened at a time when the race was fragmented, which delays information and makes these situations extremely hard. Toms instinctively continued riding but it was clear that he couldn’t go on. It’s a blow for the team and for his own ambitions but that was a serious fall, and racing can take a back seat while he heals.”