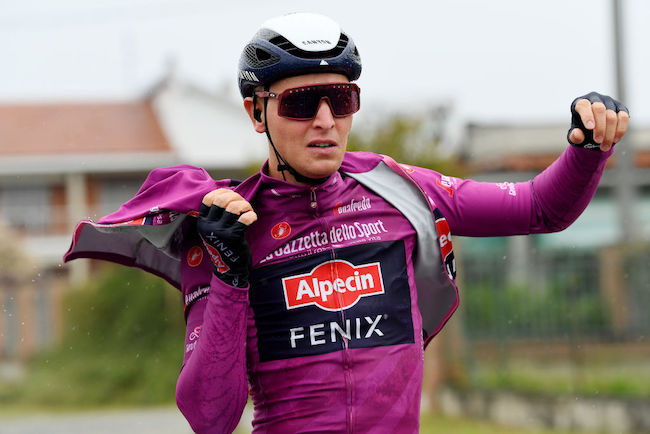 Tim Merlier, winner of stage 2 this year, has decided to withdrawn from 2021 Giro d’Italia.

The Alpecin-Fenix sprinter was competing in his first Grand Tour and won the first sprint stage in Novara before finishing third on stage 7 in Termoli. He has been struggling with stomach and intestinal problems and symptoms of fatigue for several days.

“It is a shame I have to leave the Giro. But I believe it’s the most sensible choice right now,” Merlier said.

“This was the first time in my career that I raced for 10 consecutive days, and the past few days have taken their toll. With my current physical readiness, I don’t feel able to sprint for the win and I don’t want to compromise the rest of my season.”

“I’m proud and honored that I could make my Grand Tour debut here,” Merlier said.

“This Giro d’Italia has been an unforgettable adventure for myself and for Alpecin-Fenix. We came here aiming for a stage victory. I’m therefore very pleased that we were able to achieve that goal and that we continued to battle for stage wins afterwards.

“It was a great honour and a great motivation to be able to wear the iconic Maglia Ciclamino for five days. I will support the boys from home now in the next 11 days.”