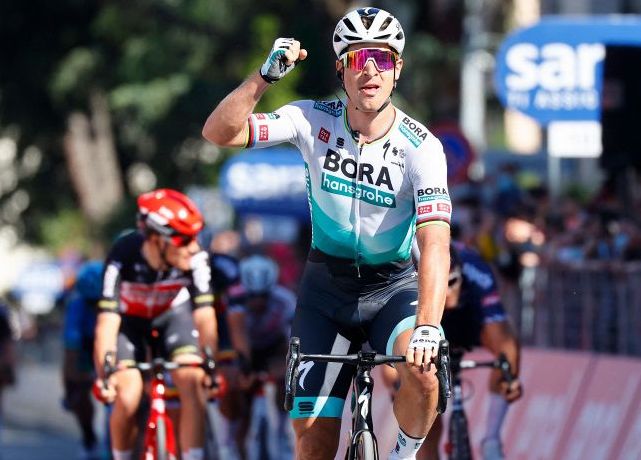 Peter Sagan finished off the job done by his Bora-hansgrohe as he claimed victory in the 10th stage of the Giro d’Italia on Monday.

The triple world champion outsprinted Fernando Gaviria at the end of a 139-km ride from L’Aquila to Foligno after his team’s acceleration on a climb had shaken off some of the top contenders for the final sprint. Davide Cimolai finished in third place.

Egan Bernal, who took the overall lead on Sunday, retained the Maglia Rosa with a 14-second lead over his main rival Remco Evenepoel after both went toe-to-toe for bonus seconds at the intermediate sprint.

Bora-hansgrohe accelerated on the short ascent to Valico della Somma, a move that resulted in Tim Merlier, Giacomo Nizzolo and Dylan Groenewegen being dropped.

Bernal and Evenepoel battled it out for bonus seconds at the intermediate sprint with the Colombian’s Ineos-Grenadiers team mate Jhonatan Narvaez getting in the mix to deny the Belgian prospect first place.

Tuesday is the race’s first rest day in Perugia.