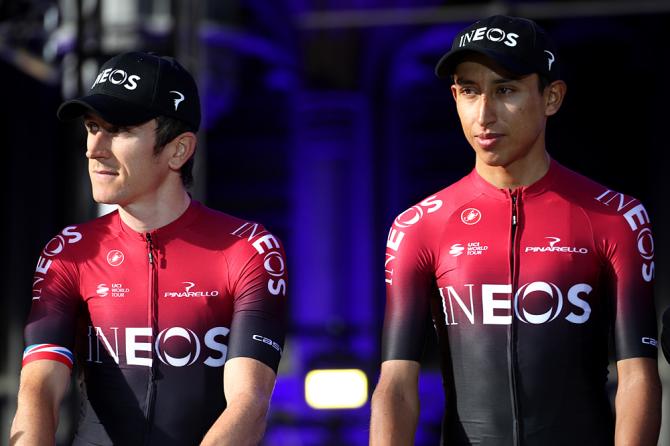 (Reuters) – Geraint Thomas will find himself in the unusual position of being defending champion but not even the outright leader of his team when the Tour de France starts in Brussels on Saturday.

It was always likely to be the case, but rather than sharing the honor with four-time winner Chris Froome, it is 22-year-old Colombian Egan Bernal who will get equal billing.

With Thomas’s preparations having taken a hit after a crash at the Tour de Suisse and Bernal having a sensational season so far, there is even the possibility that the 33-year-old could end up riding in support of his young team mate.

Last year Thomas, Froome’s loyal sidekick in the mountains for so long, was given the green light to attack when Froome initially struggled in his quest for a record-equalling fifth title. He grabbed his chance to reach Paris in the yellow jersey.

With Froome absent after a horrific crash while training at the Dauphine, Team Ineos chief Dave Brailsford has elected to operate a joint-leadership policy he thinks will offer one of them the best chance of overall victory.

Thomas appears happy with the situation although admits the team will miss the “aura” of Froome this year.

“Egan and I are not rivals,” Thomas told reporters at Team Ineos’s pre-race news conference. “Hopefully one of us wins and it’s really uneventful.

“There are a lot of contenders this year for the podium but hopefully they’ll be a couple of steps lower than me and Egan.”

First-time Tour de France winners have struggled to back it up the next year and even Froome found it too much in 2014 when a crash ended his hopes of a repeat.

Thomas, however, says he feels under no extra pressure.

“I don’t think I’ve got anything to prove,” he said. “Last year was a great race, an amazing experience and I’d love to experience that again. It takes the pressure off if anything, because all I wanted was one race where I had no bad luck.

“I don’t think I’ve got anything to prove. Some people have said about maybe being a one-hit wonder, but it’s a pretty good hit to have. I’m just going to enjoy it. Race well.”

When broadcaster Sky said at the end of last year they were pulling the plug on their sponsorship, it seemed the break-up of cycling’s most successful team for a decade was imminent.

Brailsford pulled a rabbit out of the hat though and Jim Ratcliffe, owner of the Ineos petrochemical giant and Britain’s richest man, bought the team, meaning he is again in charge of the peloton’s most powerful outfit.

Apart from Froome, seven of the eight riders who took part in Sky’s final Tour, will start Ineos’s first with the new exception being Dutchman Dylan van Baarle.

“It’s been a whirlwind few months really,” Brailsford, who confirmed Froome left hospital on Friday, said. “We have a fantastic team, an experienced group of guys who know how to race. And we’ve got two great leaders.”

Brailsford used to be a disciple of “one team, one leader” but is confident Thomas and Bernal will complement each other.

“Fundamentally if they both recognize that it’s a good thing if one of them wins, then that optimizes their possibilities of one of them winning instead of having some kind of tension between them,” he said.

“It’s about the degree of trust and knowing how the dynamic works. The relationship between them is good.”