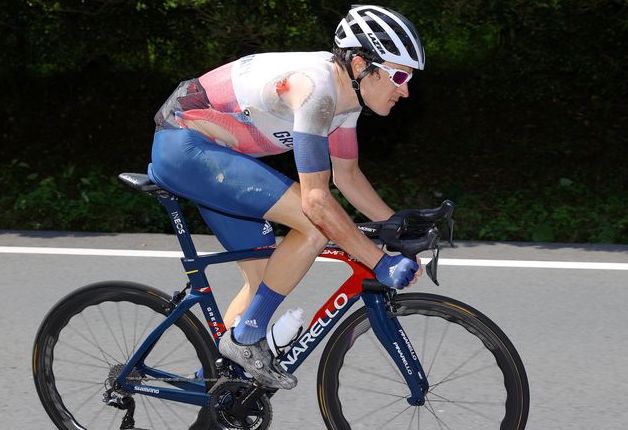 (Reuters) – Geraint Thomas said he “must have done something wrong in a previous life” after his hopes of a first Olympic road race medal were wiped out by yet another crash on Saturday.

The Welsh former Tour de France champion was tipped as a medal prospect on a 234-km course packed with brutal climbs, but he hit the deck early on in a crash also involving fellow team member Tao Geoghegan Hart.

Thomas soldiered on grimly with a gaping hole in his race suit and a bloodied shoulder, but rode into the pits at the Fuji International Speedway with 55km remaining and got off his bike.

He will have another chance in Wednesday’s time trial but he needs his luck to change soon.

“All good with me. Thanks for the messages!! Think I must have done something bad in a previous life,” the 35-year-old wrote on Twitter later after an edition to his tales of woe.

Five years ago in Rio de Janeiro he looked on course for a possible gold medal but crashed into a drainage gully on a greasy descent.

Thomas’s defence of his 2018 Tour de France title were ended a year later when he ran over a stray water bottle in a neutral zone, while a year earlier his Giro d’Italia hopes were ended when he was taken out by a police motorcycle.

Then at this year’s Tour he dislocated his shoulder on stage three after a multiple pile-up in the peloton, although he made it all the way to Paris.

“I’m feeling beat up, but not too bad. I’ve felt worse. I landed on my right side again, which wasn’t ideal, and the muscles and everything were in spasm almost,” Thomas, who spent the rest of his race at the back of the pack, told reporters.

“It’s a normal sort of crash thing. It’s just disappointing, such a freak thing. Tao slipped on a bit of a metal, a metal ridge along the middle of the road. I was on his wheel with nowhere to go, and just went straight down myself.

“It’s disappointing after all the hard work and sacrifice this year, especially after the Tour with all that happened.”

Thomas who has won Olympic gold on the track as team pursuiter, will dust himself down for Wednesday’s 44.2km time trial also at the Fuji motor-racing circuit when the risks of crashes, in theory, should be fewer.

“At the moment, I don’t think I’d say I’m looking forward to Wednesday but it’s another chance,” he said.

“I just want to forget about everything tonight, switch off, have dinner and ring Max, my son. That puts it all in perspective. I’ll get up tomorrow, recover as best I can and give it one last hit.”