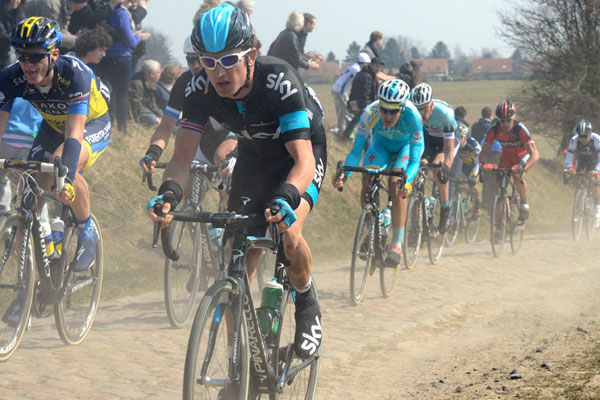 Geraint Thomas won the E3 Harelbeke in 2015 and the Tour de France three years later. Despite the fact he has been a successful grand tour rider in recent years, he still wants to ride Paris-Roubaix.

“For sure it’s still that burning desire to give that one more good go as well,” Thomas said. “Hopefully next year. The thing with one-day racing as well is that it’s A to B, it’s over in one day, and it’s just spontaneous as well. With stage racing, especially Grand Tours now, there’s a lot of calculated holding back, whereas one-day racing it’s about emptying the tank.”

“It’s an unbelievable race [Paris-Roubaix], one of a kind,” he added. “It’s unique. It’s the only thing in the world.

“The main thing is having big power for three to five minutes and being able to recover and go again. I don’t think the longest sector is much longer than five minutes.

“With Roubaix, a lot of the time it’s a big sprint into the [cobbled] sections for positions because you want to be far in front as possible with less mishaps. And yet it’s about having good high-end power, being an explosive rider and being able to recover from that again.

“The Forest of Arenberg is absolutely mental. You go from nice, smooth tarmac onto probably the most crazy section. It’s slightly downhill into there and you go into it at 65kmh.

“It’s like a bunch sprint into there because you want a good position and you hit it at this speed. You let the bike go sometimes because there’s no point in fighting it. It’s unbelievable, that sector.”