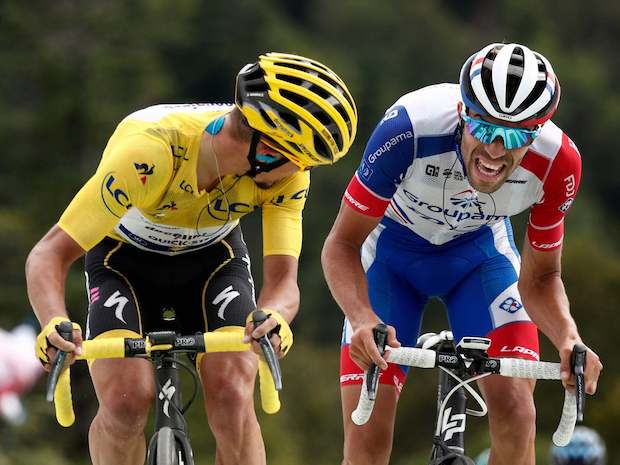 (Reuters) – Thibaut Pinot has suffered countless setbacks on the Tour de France, but the Groupama-FDJ leader believes he is ready to cope with the immense pressure of trying to become the first Frenchman to win the race in 35 years.

Bernard Hinault last won the Tour in 1985 and Pinot has been tipped as France’s best chance of success since taking third place overall in 2014.

Yet the 30-year-old has only finished the Tour once since then, notably pulling out of the race last year two days before the final stage after picking up a thigh injury when he had a genuine shot at the title. That made him mentally stronger, he said.

“In my head I’m stronger, I’m more serene and I feel less pressure,” Pinot, who has won stages on all three grands tours, told a news conference on Friday. “It can’t be worse than last year anyway, I hope. It toughened me up, I feel more confident. I’m stronger this year.”

Pinot geared up for the Tour with a solid showing at the Route d’Occitanie before finishing second overall in the Criterium du Dauphine after losing the overall lead on the last day.

He has enjoyed a smooth lead-up to the Tour’s Grand Depart in Nice on Saturday, while his rivals, defending champion Egan Bernal and Slovenian Primoz Roglic, have suffered injuries.

Yet Bernal’s Ineos Grenadiers team and Roglic’s Jumbo-Visma outfit are the stronger in the field, although that doesn’t worry Pinot.

“It means that they will be responsible for controlling the race. We don’t have to do that,” the Frenchman explained. “In the third week, there will be room to attack and be aggressive.”

Riders have been in a sanitary bubble since they arrived in Nice due to the COVID-19 pandemic and they know that two positive cases among an eight-man squad can lead to the whole team being excluded.

“I don’t think about it but it’s true that we have a sword of Damocles above our heads,” said Pinot.