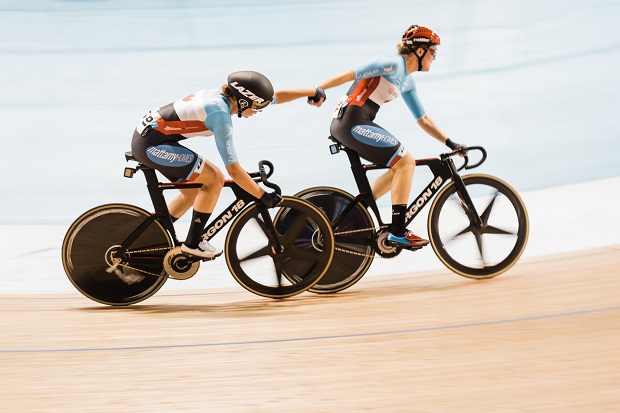 Canada is celebrating a haul of four medals at the 2022 UCI Track Cycling World Championships, which took place at the Vélodrome National in Saint-Quentin-en-Yvelines.

Dylan Bibic won Canada’s only medal at the UCI Track Cycling World Championships, becoming the first Canadian gold-winning cyclist in the men’s scratch race, a 15-kilometer event. Bibic, who hails from Milton, Ontario, emerged victorious ahead of Kazushige Kuboki of Japan and the Dutchman Roy Eefting. Bibic’s victory saw Canada finish in ninth place in the medal table. The Netherlands topped the podium with four golds and a total of ten medals.

Bibic, who was one of 19 Canadian cyclists at the championships, is already looking ahead to the UCI Track Champions League and, ultimately, the 2024 Olympic Games.

Winning gold at the first attempt

Two Canadian representatives in the UCI Para-cycling Track World Championships managed to bring home one silver and two gold medals, earning Team Canada an eighth-place finish in the medal table. Mel Pemble of British Columbia won two gold medals in her very first appearance at the event, coming first in the scratch race and the omnium. In both races, she finished ahead of Aniek van den Aarssen of the Netherlands and US cyclist Clara Brown.

Pemble’s teammate Kate O’Brien, who entered the event as world champion, won silver in the 500-meter time trial, where she was pipped to the post by British cyclist Kadeena Cox, who also won gold in the team sprint. With just four Canadians participating in the UCI Para-cycling Track World Championships, the medals haul represents an excellent return for Team Canada.

The victories are likely to contribute to the popularity of cycling in Canada, with a great deal of hype also generated by Hugo Houle becoming just the second Canadian in history to win a Tour de France stage. The increased profile of the sport means it is possible to bet on a wide range of cycling events, with odds on individual races, game lines and player prop bets. With major cycling events taking place next year and the Olympic Games being held in Paris in 2024, cycling fans can check the best online betting in Canada for the latest odds on the Milan-San Remo road cycling race with the Belgian Wout van Aert the current favorite at +550 with Bodog.

Pemble capped a spectacular debut at the event in France by breaking the world record in the omnium 200-meter sprint. She expressed her surprise at both her gold medal win and her time of 12.666, commenting: “It was my main event coming in, so to be able to perform today and have such an amazing debut makes me really proud. I still can’t believe that I am a World Record holder.”

Pemble and O’Brien also teamed up with Alexandre Hayward to compete in the mixed-team sprint event. The 25-year-old, who has experienced a meteoric rise in cycling, was competing in his first international track event. Ultimately, the trio ended in eleventh place with Great Britain winning both mixed-team events.

The Canadian cyclists will be hoping to make a welcome return to the Velodrome National in 2024, when it will serve as the cycling venue for both the Olympic and Paralympic Games in Paris. There is every chance Canadians will be on the podium once again as the greatest athletes in the world come together to compete in Paris.