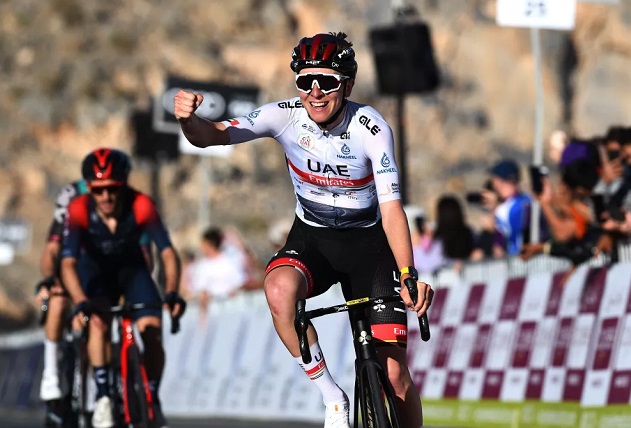 Tadej Pogacar made an early-season statement when he sprinted away from an elite group on Wednesday to win the first climbing stage of the World Tour season in the UAE Tour.

A powerful bunch was still together as the 181-kilometre fourth stage slogged up Jebel Jais, the highest point in the Emirates. Even though the gradient steepened to seven per cent in the last 200 metres, the Slovenian, led out by two of his UAE team-mates, charged away.

Adam Yates of Ineos and Aleksandr Vlasov gave chase in a frantic uphill sprint, but could not close the gap. The trio finished three seconds ahead of the next group of the shattered bunch.

Pogacar, the defending UAE Tour champion, took the overall lead from Stefan Bissegger who was dropped earlier on the climb. He leads Filippo Ganna by two seconds.

Vlasov is 13 seconds off the lead in third with Yates another two seconds back.

Thursday’s fifth stage will cover 182 kilometres from Ras al Khaimah Corniche to Al Marjan Island and is likely to end in a sprint.