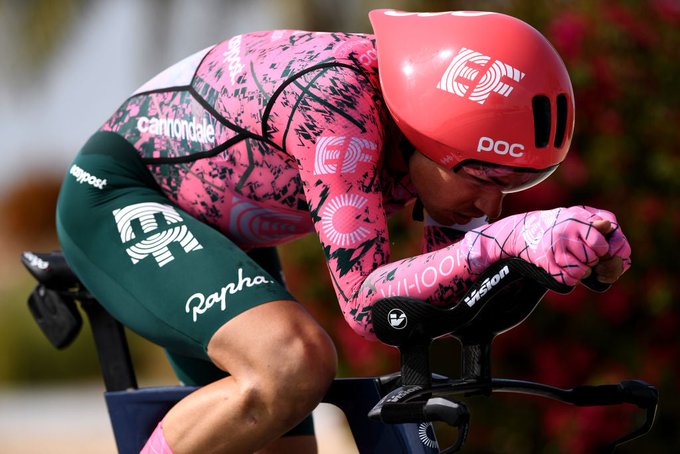 The EF Education-EasyPost’s rider clocked 9’43” in the 9-kilometre time trial to come clear of Ganna by seven seconds, handing the Ineos Grenadiers rider his first defeat in a time trial this year.

Tom Dumoulin joined them on the podium ahead of the Tadej Pogacar, who moved to fourth overall to set himself up for the defence of his overall title.

“I had a really good time trial today,” Bissegger said. “I was also pretty confident that I had good power and so could have a good time.

“It’s always nice to win and make it, because you never know in a time trial, it’s hard to say how good the others are and if someone has the best day of their lives. I knew at the finish that my time was really good.

“I was looking forward to this time trial for a long time. I had a rough winter with a broken scaphoid and it took a long time until it was fixed. I’m really happy to be back.”

With the first of the two mountain stages on stage 4 on Wednesday, Dumoulin could be a threat. Aleksandr Vlasov (Bora-hansgrohe) and Adam Yates (Ineos Grenadiers) remain the other GC contenders.

UAE Team Emirates have both Pogacar and Joao Almeida, who was fifth in the time trial, 22 seconds down on Bissegger and four seconds behind his Slovenian teammate.