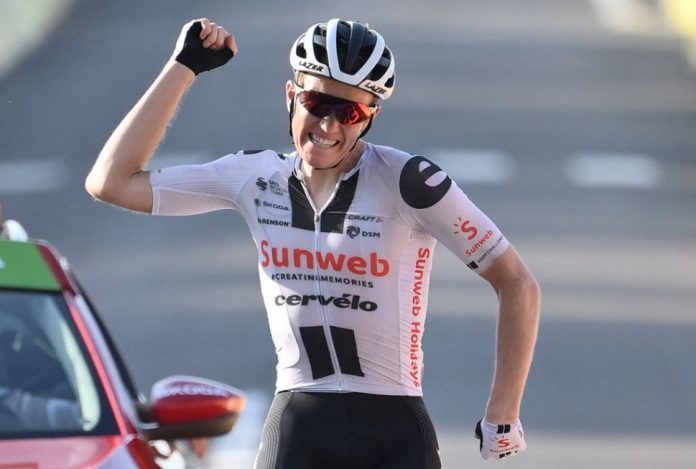 Soren Kragh Andersen doubled down and raised his arms in victory again on stage 19 of the Tour de France on Friday, with another cunningly timed attack.

Behind him, saving their last reserves of strength for a time trial on Saturday that will decide the Tour podium, race leader Primoz Roglic and his rivals preferred to coast to the finish while Andersen hared off for the prestige of the stage victory.

He left 11 other riders he’d been with in a breakaway for dead with an acceleration 16 kilometers from the finish in Champagnole in eastern France. He held up two fingers at the line – one for each of his stage wins.

The focus now shifts to the time trial where Roglic will be aiming to secure his first Tour title, and the first at the 117-year-old race by a Slovenian.

And if he suffers a mishap, Slovenia will still have a second chance, in the shape of Tadej Pogacar, who is second overall. Just 57 seconds separate the countrymen after more than 3,300 kilometers of racing on French roads since the Aug. 29 start.

That cushion should be ample for Roglic, the winner of time trials last year at the Vuelta, which he won, and at the Giro d’Italia, where he finished third.

At national championships in Slovenia in June, Pogacar beat Roglic by nine seconds in a time trial that also had a similar gain in altitude, about 700 meters, but was much shorter, at just under 16 kilometers.

The route on Saturday is more than twice that, at 36.2 kilometers. It will require a nuanced effort, with an initial flat section followed by a first uphill and then a twisting downhill before a sharp climb up hairpin bends to a small ski station, at La Planche des Belles Filles. The finishing ramp is a very steep 20% gradient, with other sections before that of more than 10%.

Pogacar, who has showered his first Tour with his precocious talent, winning two stages, and who turns 22 the day after the finish in Paris, can be counted on to again give it his all.

”If I’m on a good day, it’s a course that suits me well,” he said. ”If someone told me I’d be in this position before the Tour, I would never have believed them.”