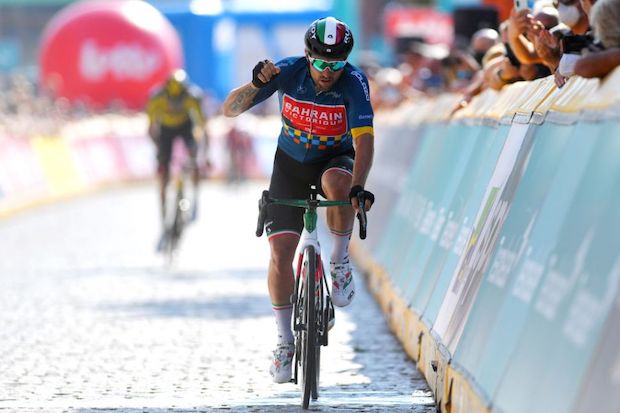 Sonny Colbrelli won the Benelux Tour on Sunday as Bahrain teammate Matej Mohoric of Slovenia claimed victory in the seventh and final stage.

Mohoric won the stage by 11 seconds from Colbrelli, but the Italian rider did enough to take overall honours by 29sec from the Slovenian.

Mohoric, winner of two stages on the Tour de France this year, produced a solo breakaway on the 180.9km final stage which finished with a climb of the Mur de Grammont.

But Colbrelli’s overnight lead of 51sec was enough to see the 31-year-old retain the blue race leader’s jersey.

“We knew that together we are a good unit,” Mohoric said. “We played our cards a little bit differently. We didn’t want just to defend Sonny’s lead by setting tempo and bringing back breaks, we wanted to provoke others to attack and for me to follow, so that the other riders would need to pace Sonny back to my wheel.

“We executed the plan perfectly, and it worked like a dream. We can’t be anything else but happy today.”

✔ Today lead the peloton to Geraardsbergen, once again! The race never slowed down, with Matej Mohoric coming out on top.

✔ His teammate Sonny Colbrelli wins the GC after a second place at the Vesten #BeneluxTour pic.twitter.com/RooHZKf42j