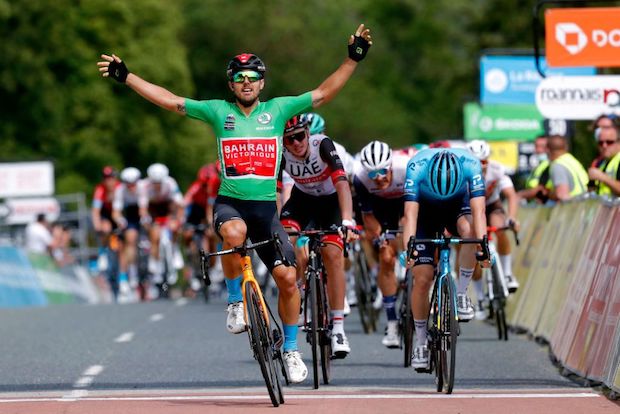 Sonny Colbrelli finally broke through at the Criterium du Dauphine on Tuesday overhauling Alex Aranburu in an uphill sprint in Saint-Haon-le-Vieux.

You can rewatch STAGE 3 of 2021 Criterium du Dauphine HERE

Colbrelli had shown he was the strongest sprinter in the peloton in the first two stages. But on both days, the Italian had to settle for second after his Bahrain Victorious team failed to haul in the last breakaway rider.

“After two second places, today I’m very happy for this victory,” Colbrelli said at the finish.

The peloton caught the day’s breakaway with 20km to go on a flat 172.2 km ride. Despite a crash late in the stage, the pack was all together as it hit the final uphill drag.

Aranburu surged clear with 300 metres to go but Colbrelli reacted at once and gave chase.

In a slow-motion battle up the slope, the Italian drew level with 100m to go and gradually pulled clear.

Brandon McNulty of UAE came through to grab third.

“It was a very hard last kilometre,” said Colbrelli. “I followed Aranburu’s wheel but it was tough to pass him.”

Colbrelli increased his lead in the points classification and the bonus seconds he collected took him to two seconds behind Postlberger in the overall classification.