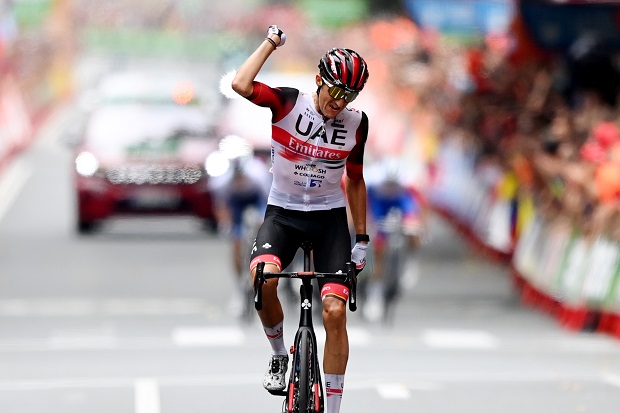 Marc Soler ended Spain’s two-year wait for a stage winner at a Grand Tour as a late solo attack earned him victory on stage five of the Vuelta a Espana on Wednesday.

Rudy Molard seized the leader’s red jersey after a hilly 187.2km ride from Irun to Bilbao.

Soler (UAE Team Emirates) attacked from a chasing group to catch and pass Jake Stewart (Groupama-FDJ) on the final climb and stayed away to cross the line four seconds ahead of the chasers including Molard (Groupama-FDJ).

Defending champion Primoz Roglic (Jumbo-Visma) had taken the red jersey on Tuesday but finished back in the peloton and is now fifth, four minutes and nine seconds back.

It was no surprise, however, that Roglic’s team relinquished the jersey as they will bide their time and the Slovenian will still be favourite to claim overall victory.

Molard, thanks to three bonus points he claimed on the final climb of Alto del Vivero, will take a slender two-second lead over Fred Wright into stage six with Nikias Arndt 1min09s down.

Soler appeared to have been in trouble on the day’s final climb having bridged across to the breakaway group, but he burst to the front with 2.5km of the ascent left.

It still looked as though he would be caught on the descent into Bilbao but he maintained a 10-second lead and the chasers left it too late to reel him in.

Thursday’s stage includes the first category one climb of this year’s race with a summit finish at San Miguel de Aguayo.