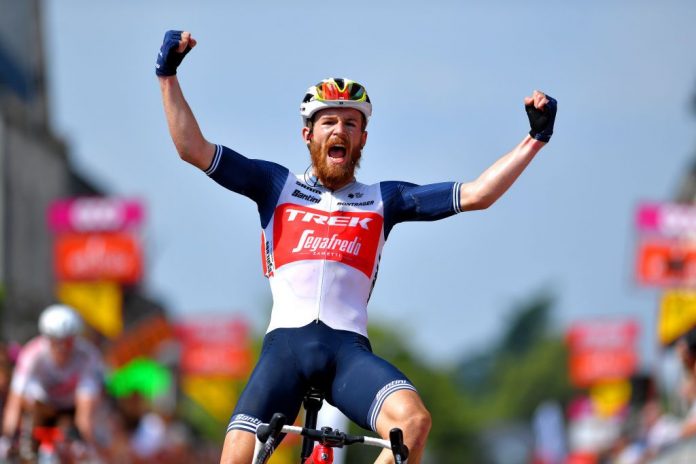 Quinn Simmons blasted to his first pro victory Thursday at the Tour de Wallonie in a hilly, 170km stage from Plombières to Érezée.

You can rewatch STAGE 3 of 2021 Tour de Wallonie HERE

The Trek-Segafredo rider beat Stan Dewulf (AG2R Citroen) to the line and he’s now at the head of the general classification in Belgium.

“It’s my first pro victory, and first sure the first pro win is a big one. It’s been a year and a half now as a pro, and to finally make it happen is a big relief,” Simmons said after the stage. “It took a while, and I was starting to lose faith in myself. But you saw how the guys rode today – it was perfect.

“When it’s a sprint after this many climbs, I am pretty confident,” said Simmons. “When it’s on the flats, I don’t stand a chance, but this is more my kind of sprint, so once the two of us were there, I knew it was game over. It’s never easy to win, but with the way the team rode and set it up for me to do my job was really straightforward. Thanks to the team, it was as easy as it could come.”