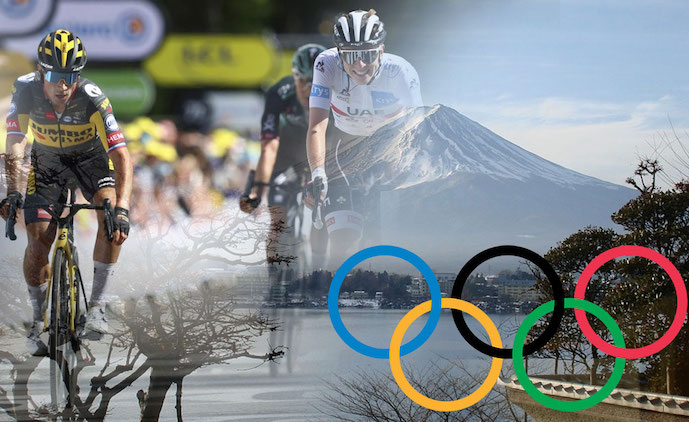 (Reuters) – The iconic splendour of Mount Fuji will provide a majestic backdrop to the Olympic men’s road race on Saturday – but those in the saddle will not be enjoying the view.

Gold medals are not supposed to be easy pickings, but a 234km route featuring 4,865m of climbing means whoever crosses the line first at the Fuji International Speedway will have earned it the hard way.

After rolling off the start at Musashinonomori Park the opening 40km are gentle enough, but from then on there will be little respite as the climbs come thick and fast.

The peloton will tackle Doushi Road, a relatively simple climb of 5.9km before flanking the picturesque Yamanaka-ko Lake, where recreational riders can enjoy the hot springs.

The real grind would have only have just begun though, with a white-knuckle descent before an undulating 50km circuit on the slopes of Mount Fuji before the sting in the tail — the fearsome Mikuni Pass.

Any rider already on an empty tank will feel like they are pedalling through treacle on a lung-searing 6.75km climb at an average gradient of 11.5% and exceeding 20% in places.

Throw in the expected 30 degrees Celsius temperatures and high humidity and it will be no surprise if the medal fight boils down to a small surviving group of climbers and all-rounders such as Belgium’s Wout van Aert.

“We have ridden the two toughest climbs and they are certainly tough, the heat and humidity will certainly add to that,” Britain’s former Tour de France champion Geraint Thomas, expected to challenge for gold, told reporters on Thursday.

“The Mikuni Pass is a proper climb, it’s steep and challenging and you are going to have to ride it well to not blow up, it’s going to be a war of attrition with people constantly going out the back.”

As illustrated in a sensational finish to a crashed-littered race in Rio five years ago when Belgian Greg Van Avermaet took gold, the Olympic road race throws the usual race tactics textbook out the window, with team orders often replaced by an “every man for himself” attitude.

Saturday’s course, described as one of the toughest ever in the Olympics, promises more of the same.

“It’s very tough,” he said. “There is almost no flat spot from the start – only at the lake. The rest is climbing or descending. Then there’s the heat and the distance.”

Thomas crashed out in Rio with a medal in sight and believes the Mikuni Pass will be the decisive moment.

“That will probably decide it,” he said, although there is still 10km of flat after the final decent. So a small group off the front with 20 seconds or so lead could easily stay away.

“There is so much that can happen and that’s what makes the road race so good to watch and not so good at times to be part of. It’s not a lottery – but you need a bit of luck for sure.”

The 137km women’s race on Sunday will miss out the Mount Fuji section but will still provide a tough all-round test with 2,692m of climbing.