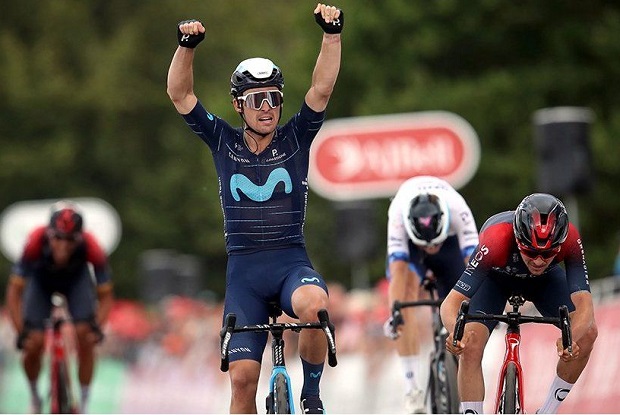 Gonzalo Serrano moved in to the Tour of Britain race lead after winning a dramatic fourth stage between Redcar and Duncombe Park, Helmsley, on Wednesday.

Serrano pipped home favourite Tom Pidcock, Dylan Teuns and Omar Fraile to the victory after the quartet broke clear over the climb of Newgate Bank with 8.4 kilometres remaining.

In addition to becoming the first Spaniard to win a stage of the UK race in 10 years, Serrano moved into the leader’s jersey, with both Pidcock and Fraile trailing by seven seconds.

“Today was a crazy day,” said Serrano. “Very, very aggressive but my team was with me for company. It was a difficult day, but they worked strongly to close down the breakaway in the last kilometers. [Tom] Pidcock and [Omar] Fraile are very strong and, in Britain, this race is very important for INEOS, but I attacked in the last climb, and in the sprint I thought I can win.”

Overnight leader Ben Perry (Wiv SunGod) dropped to fourth overall on the same time as Pidcock and Fraile, with Israel–Premier Tech duo Teuns and Corbin Strong sitting next at 10 and 14 seconds in arrears.